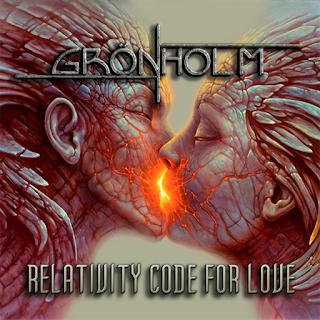 Already in the early eighties, Mika Grönholm showed his first deeper interest for the world of music by listening to bands like the Beatles, Led Zeppelin, Rush, Yes and Van Halen (to name a few) ... so inspired, he began to play guitar himself. Over the next decades and with a lot of studio and live experiences, he formed his own band GRÖNHOLM to realize all his musical and lyrical ideas. With drummer Tom Rask and singer Markku Kuikka the right comrades were quickly found and the impressive results of this combination are recorded in the two albums "Eyewitness Of Life" 2010) and "Silent Out Loud" (2011). I have to admit that Grönholm are a new band to me despite my love for a lots of things melodic.

The upcoming third album "Relativity Code For Love" is an appreciation, study and musical journey about love, all told in the language of melodic rock. With British exceptional singer Lee Small, rock fans worldwide best known as the voice of Shy, Tom Galley's Phenomena, Skyscraper and many others, one of the most appropriate artists was taken on board to give this mission the right refinement.

Watching Small live is not one of the best things as his rapport has always been that of devoid of eye contact. But, this isn’t live, and you judge him on his vocals. The very first listen is one of absolute quality. Lee Small has a soulful and bluesy tone. Now if I said that he was a poor mans Glenn Hughes, the praise is still high as Hughes is an absolute ROCK GOD! His voice is one of the smoothest around. If you love the lives of Overland and Ousey then Lee Small should be high on your list.

‘Reasons’ opens the show and its one that instantly grabs your attention. Small shows subtle Glenn Hughes tendencies, but the overall result is one that is of a high calibre and very polished. ‘Home In Our Hearts’ has a bubbling under feel to it, and after a couple of listens its one of the best AOR songs of the year!  It undoubtedly shows the strength of Grönholm’s writing. ‘Like An Angel’ is more direct, a powering riff duelling with Smalls vocals.

Small is the glue that holds Grönholm’s music together. Sure the songs are well written and produced but what are good songs without someone who can add style and substance to them. Small does this in abundance. I’ve heard his work with Shy, Lifeline, and United Nations, and this is undoubtedly his best work to date

The result is a concise and entertaining piece of Hard Rock/Melodic Rock/AOR with fine progressive influences and resounding catchy melodies which will grab the audience with a unique style and higher musical claims. The fresh dynamic mixing and mastering of Janne Tolsa (Nightwish, Tarot, Eternal Tears Of Sorrow ...) has completed the whole release to one of the forthcoming rock highlights this year.

This is an album for any discerning fan of AOR/ Melodic Rock. I urge you strongly to beg, steal or borrow a copy of this cracking album.