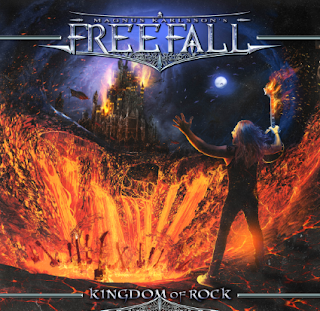 There’s been a bit of a rebuttal from Serafino Perugino, owner of Frontiers Records very recently in the world of Facebook. He wrote an interesting personal note to the fans who are knocking the Frontiers ‘projects’ that will never see the light of day in a live setting – I strongly suggest you read it, as it’s a passionate plea to fans about his work, and most importantly, he does this because he is a fan.

I admit myself that I have been guilty of stating that some of these projects are a whim, but lets face it, if it were not for Serafino, the melodic rock genre would definitely be a poorer place in which we live. It costs a lot of money to bring people from all over the world to play for us. The recording costs are fairly low, but getting it altogether in a studio or a live setting is probably a logistical nightmare. If one person is capable then its Perugino. Especially as he has his labels own festival that could make it happen?

The melodic rock genre is probably in the best place its been in years, but lets not get carried away here, its still very much a minority spectator sport. When compared to RnB for example, Heavy Metal is a minority. So where the fuck does that place melodic rock /AOR music in the scale of things?

So thank you SP for your sterling work.

The above sets me up as Magnus Karlsson’s Free Fall is the exact ‘project/supergroup’ type band that’s been in the news this week. In my eyes, if you’re going to go for it, do it with style, and in this instance the vocalists involved here are some of the communities finest – jus look at the assembled cast – Jorn Lande, Jakob Samuel, Joe Lynn Turner. JLT will turn up for the opening of a crisp packet for the right money, but ITS STILL JOE LYNN TURNER FFS! Also there’s Tony Martin, Tony Harnell, David Readman, Rick Altzi and Harry Hess. That’s quite a stellar cast of singers I’m sure you will agree. Backing up the  accomplished pack is Karlsson himself on 2 songs, and Rebecca De La Motte, so Im sure you will agree, its quite a collection (a ‘warble’ of singers perhaps?)

Consider Karlsson an artist, rather than artiste. He uses singers like an artist would choose colours. The right singer is picked for the right song. Opener and title track Kingdom Of Rock is pure Power Metal, with Norwegian JornLande channeling his inner Dio and is akin to his Allen-Lande music. One of my recent and newly acquired singers (well, new to me!) Jacob Samuel certainly delivers the goods on ‘Out Of The Dark’. Both JLT (No Control) and Hess (A Heart So Cold) get the more relaxed and straight down the middle melodic rock songs to cover. Turners vocals are aging very well I have to say. Tony Martin’s vocal chords get a good ‘ol airing on the epic and huge sounding ‘When The Sky Falls’ and is the standout track on the whole shebang. PC69s David Readman (Angel Of The Night) and Masterplan’s Rick Altzi (Another Life) are responsible for ‘KoRs’  more powerful and pulsating Power Metal songs. Tony Harnell’s voice as hardly changed in over 30 years and add his unmistakable tone to the ultra catchy ‘Never Look Away’.

Props to Karlsson for gathering such a cracking troupe to perform his songs, but the main plaudit must go to Magnus Karlsson himself, as its HIS songs, HIS, production, and HIS playing that knits the whole concert together like the strongest of glues.  It’s a testament that Karlsson holds his own when singing on ‘I Am Coming For You’ and ‘Walk This Road Alone’. That speaks strongly of the guy considering the company he keeps.

If you like your metal enthralling, pulsating, powerful and melodic at the same time then look no further than ‘Kingdom Of Rock’

The last word goes to Karlsson himself….Magnus Karlsson says, “When I made the first Free Fall album I had a wish list of my favorite singers. The list just got longer and longer and I realized that one album just wasn’t enough. I knew that some of the names on the list would be almost impossible to get but hey it’s ok to dream right? I started to work harder than ever before on new songs specially written for each singer. Well sometimes dreams come true and now some of the greatest singers in the world joined the dream team. This is not about having big names on the album, this is simply about making the best music I possibly can for the best singers I know!” Do you know what, he is spot on!

Tracklisting…
Kingdom Of Rock (Jorn Lande)
Out Of The Dark (Jacob Samuel)
No Control (Joe Lynn Turner)
When The Sky Falls (Tony Martin)
Angel Of The Night (David Readman)
I Am Coming For You (Magnus Karlsson)
Another Life (Rick Altzi)
Never Look Away (Tony Harnell)
A Heart So Cold (Harry Hess)
The Right Moment (Rebecca De La Motte)
Walki This Road Alone (Magnus Karlsson)
Posted by aorwxm at 13:06