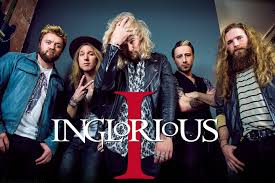 The people who attended The Old Courts witnessed something special tonight, as I’m sure all the other venues have on their debut album tour. I’m not a massive fan of the Old Courts, a hall with massive fuck off columns that obscure the stage. That said, this place holds an affinity for the Inglorious boys as it’s where they cut their first video.

All the guys mozied onto the stage one by one to The Who, leaving ‘The Hair’ and ‘The Voice’ (Nathan James) to enter last to the loudest of receptions. Yes he is the focal point of the band, but Inglorious have mustered up something very here as ALL of them contribute to one of the best debut gigs I’ve witnessed, EVER! 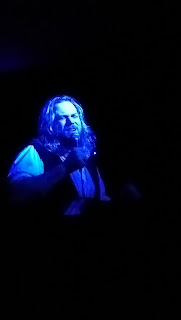 Within the first few bars of ‘Until I Die’ we all knew we were witnessing greatness in the making. Inglorious don’t seem like a brand new band, they play as if they’ve been together for years, tight as a nut with a guy with a flamethrower of a voice. A lot of singers can strip 7 coats of paint off a barn door, but then there’s Nathan James. ‘Breakaway’ just intensified the pace of the set before a superb cover of one of their (and mine) fave bands; Rainbow’s ‘I Surrender’, with the vocal harmonies going off the scale. Special mention here for the non-Brit Andreas Eriksson’s guitar playing especially following Blackmore’s lead and it was well and truly nailed! ‘High Flying Gypsy’ is James’ tribute to Coverdale, and today he is more Coverdale than Coverdale! ‘Bleed For You’ built its pace to a huge crescendo. I hate to harp on about one bloke in particular, but the pitch, tone and huge scale of James’ voice is immense. (Take care of that voice son).

‘Inglorious’ is one difficult song to pull off, especially the beginning with the harmonies that have the potential to be ‘pitchy’ but weren’t, and afterward I thought ‘here we go, another friggin drum and bass solo’ but this was different. It was a reprise of ‘Inglorious’, and Colin Parkinson is obviously a huge Billy Sheehan fan, and the groove laid down was rather cool. Phil Beaver, in accompaniment was also tight. Beaver’s a cross between Ginger Baker, Animal, and Captain Caveman. I put him close to Jerry Gaskill, and that’s some complement.

A mind-blowing cover of Toto’s ‘Girl Goodbye’ came up next. This version was absolutely (well, I’ve said it already), mind blowing. The musicianship and all surround-sound harmonies were nothing short of stunning. I’m not ignoring ‘Holy Water’ (again brill!), but it was sandwiched between two David Cover-version songs, ‘Fool For Your Loving’ and ‘Lay Down, Stay Down” I sware that if they had covered ‘Burn’ I probably would have fainted. In the past I’ve felt that covers are ‘fillers’ for new bands, but in this case, all four songs tonight just increased the excitement level.

The set was over all too quickly with ‘Unaware’ as the encore. It could be a Bond theme song, but it’s our song instead. Just when you think it’s a gentle and subtle ballad, it just rips your ears off your head and leaves you begging for mercy.

James is a whirling dervish of a front man, totally captivating, and waving his arms like he’s landing a Boeing! Couple this with the huge talents that are Inglorious and it will see these guys playing much bigger and better venues in a very short space of time. I expect great things of Inglorious.

Inglorious definitely are the future of British Rock, and possibly Rock in general. Think Wyld Stallyns as a universe-uniting band only with better songs!

If they are looking for tour sponsors, I’d thoroughly recommend Nitromors, and E.A.R. as you are guaranteed to leave with some hearing loss. Unmissable.

Until I Die
Breakaway
I Surrender
High Flying Gypsy
Bleed For You
Warning
Inglorious
Girl Goodbye
Fool For Your Loving
Holy Water
Lay Down, Stay Down
Girl Got A Gun