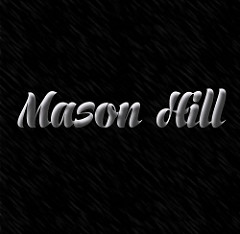 Mason Hill. An unusual name for a band, but a rather good one I think. From a much earlier interview James states “Eventually, Scott saw the name Dr Mason in the newspaper with an article that was either about a hill or the word hill was in the title. It was a long night. Anyway, he said Mason Hill out loud and it just run with us as it wasn’t the world’s greatest band name but we didn’t dislike it like the others. We felt it naturally and stuck with it.”

Mason Hill has been gigging throughout Scotland for nearly two year playing at venues in Glasgow, Edinburgh, Bathgate, Fort William and Inverness. Highlights include packed houses at Mad Hatters in Inverness, Wildfire and Ice festival in Glasgow and King Tuts in Glasgow. The band has played several higher profile shows lined including supporting The Burning Crows and Falling Red on the "Behind the Veil of the Damned" tour, an appearance of the Wildfire Rock and Metal festival in June 2015 in Lanarkshire, and a support slot for Snakecharmer.

The debut EP was recorded at The Foundry Music Lab in Motherwell and was released in late 2015. Lets come straight to the point, Mason Hill are a band that you’re going to hear a lot more about over the coming months and years.

“Survive” comes right out of the starting blocks with a massive bang, and you immediately know that once you hear Scott Taylor’s opening wail that these guys are gonna be good! Its a bricks and mortar, solid foundation of a song. Its short, sweet, controlled and highly effective, its key components are the soloing of James Bird and the paint melting vocals of Taylor.

“Your Memory” reminds me ever so slightly of fellow Scottish rockers Logan. Only, sorry Logan guys, Mason Hill are doing it better. Its got the hallmarks of BSC and Alter Bridge, think Black Alter Cherry and you’re there! This one is driven by the rhythm of Craig McFetridge’s drumming and the pulsating bass work of Matt Ward, before giving the keys of the castle to Bird to let rip with another cracking solo.

“Now You See Me” comes at ‘the rock’ in a different angle from the previous two, but still hits the mark with a very smooth and catchy chorus.  The pace is much different but I can see that it would clearly be a track to be built on live as a fan sing-a-long, with plenty of ‘whoa-ohs ‘ to sing into your hair brush alone in your attic.

The final song “Where I Belong” shows a gentler side to the band, and shows they are not just hard and fast (but effective) rockers. The Les Paul's are replaced with an acoustic,  but the best instrument on offer here is Taylor's vocals, who has a nice ‘rasp’ to his style. The song is wonderfully constructed, just holding back, when they could easily let rip and you all Freebird on our asses. Bird’s solo is a beautiful thing, full of soul and emotion which isn’t bad for a young bloke who has no right to be playing like this at such a young age. The crescendo slowly builds and as a whole its my fave of the bunch. I can see bikers sobbing into their beers in Glasgow!

Mason Hill have packed more quality into 18mins than a lot of bands can manage over an album. For this they should be very proud.Few bands produce an EP that is as strong as these guys have. Its one hell of an impressive start. It bodes well for their (and also for rock fans) future that there’s something new and impressive just appearing over the horizon.

I’d like to see more bands like Mason Hill, Sons Of Icarus, and The King Lot getting major exposure as these kind of bands could become the headliners of tomorrow given half the chance. Check all these guys out as the future of UK rock is in safe hands. Shit, if you don’t like them, I'll refund your money myself!*

* No I bloody well won't! I'm not stupid. But I am confident you'll love them!!

Survive
Your Memory
Now You See Me
Where I Belong