Sons Of Icarus - 'Beyond The Sun' Album Review 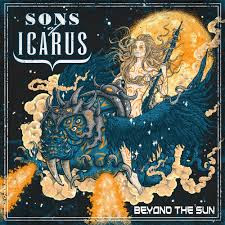 Its been quite a while (4 years and 3 months) since I first encountered Guildford’s Sons Of Icarus supporting the then relatively unknown Rival Sons, in the small Manchester Academy 3. Since then Rival Sons have gone from strength to strength, and Sons Of Icarus, not so much, even despite my admiration for them and also tipping them for definite stars of the future in 2012. They were babies back then, and they are still young whipper-snappers today

I’m not saying the boys haven’t been industrious and bone idle these past four years, far from it, and have toured vehemently these past few years. But if a band is judged on its album output then SoI are the musical equivalent of Lord Lucan. Its over 4 years since I reviewed their very good EP, and you can be easily forgotten if you are not in the public’s faces. After a very long wait, their debut album, ‘Beyond the Sun’ drops digitally 12th Feb and will hopefully be for general release in March. 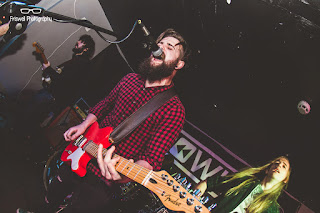 So…has the gap in releases treated them well? Thankfully you’ll be pleased to know that the musical fires have been kept burning and well stoked. The EP was heavy, but ‘Beyond The Sun’ certainly takes the face-melting up a notch or three. Opening track ‘Let It Burn’ matches Steve Balkwill’s crunching guitar with Andy Masson’s shriek and makes it one hell of an assault on the senses. In fact Andy has a voice that could strip 15 layers of paint – think of it as Nitromors for the ears! ‘Make Amends’is the first single and is a great choice (check out the South Park inspired video -  link at the bottom of the page ) and is the musical equivalent of catnip and is instantly memorable. ‘Please Come Home’ highlights the talents of Balkwill, a guitar god in the making and seems to pull riffs out of his arse for fun, none more so than on the massive ‘You Want It All’. Its one of two songs that has made it from the EP. It was good then, and almost 5 years later it is still probably the best song they have written. Established bands would kill for a song like this, and it has one of the best rock riffs this side of Tony Iommi’s moustasche!!!! The (almost) seven minute just fly by, as SoI throw all their tricks into it. 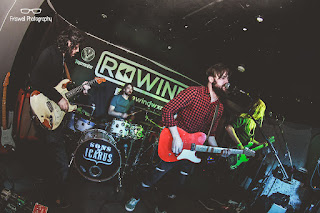 ‘Falling’ reminds me of Alice In Chains/Soundgarden/Temple Of The Dog and has its roots firmly planted in Seattle. If they’d have written it at the same time as the grunge movement, their dads would have been credited. ‘R.O.B.’ sees Andy Masson hitting notes that only people with tinnitus and small dogs can hear. ‘Not Myself’ is the other track that’s carried over from the EP and has a great up-tempo pace and borders on funky.  ‘Higher’ is one for the ladies, and more of a softer ballad than anything before, but still with a cutting edge. ‘Find Your way’ has Masson’s vocals akin to Myles Kennedy, and an overall early Alter Bridge vibe. And that people is fine by me. The end comes all too quickly and it’s an acoustically driven ‘Beauty Queen’ that sees them off. It takes its lead from the deep south, that’s Alabama, and not the Isle Of Wight. It shows another side to riff laden young guns and is a surprising change.

If I have one gripe, and its one I stated 4 yrs ago, its ‘turn the fooking bass up!’ That aside, Sons Of Icarus really deserve to be filling 2000 seat venues and not the shit holes they have been frequenting. I certainly hope that BTS gets them noticed and up the ladder and sharpish.

Fuck Iron Maiden, Fuck Black Sabbath. Fuck Metallica. They don’t need your money. Support up and coming bands like Sons Of Icarus otherwise you’ll have no bugger to go and see in 10 years time. Bands like this are the headliners of the future. The album will cost you £8 (2 pints of beer in certain parts of the UK), so do me, and them a favour and check out a superb UK rock band! You will not regret for a second.

Tracklisting
Let It Burn
Make Amends
Please Come Home
Falling
You Want It All
R.O.B.
Not Myself
Higher
Find Your way
Beauty Queen