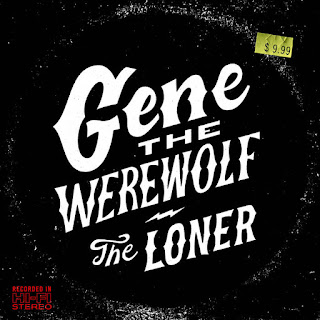 Jesus! How time flies. I cant believe its three-and-a-half years since Gene The Werewolf completely rocked my little world and blew by ears into submission with their first album for Frontiers, the excellent ‘Rock ‘n’ Roll Animal’. Whilst it didn’t hit the top spot in my 2012 albums (it made No 5 after just a couple of weeks listening) it became a firm favourite. However it was the album I listened to the most in 2013 (and quite a bit since), so this new ‘opus’ has a lot to live up to…..

Gene the Werewolf has never paid attention to trends. Nor has the Pittsburgh-based quintet been part of a scene or the hipster's band of choice. They are iconoclasts by virtue of their music, rock 'n' roll survivors in thrall to the genre's power and energy. And they're damn good at it, even if they are a dying breed. "It's strange to feel like you are one of the last of your own kind," says Gene, the band's dynamic front-man and lead singer.

In a perfect world it's music that should be blasting on car radios from Afghanistan to Zimbabwe, on jukeboxes in dives and biker bars and in every country in-between. Why, I hear you ask? Because Gene The Werewolf play full on ‘good-time party rock’ that is almost defunct these days. Posters of the hirsute Gene and his bandmates – guitarist Drew Donegan, bassist Tim Schultz, drummer Nick Revak and keyboard player Aaron Mediate -- should be on the walls of kids (and quite a few adults) across the globe. Whilst they are not the same as Wyld Stallyns, they deserve to have a ‘universal’ appeal. Put Gene the Werewolf on stage at the Whisky A Go-Go on the Sunset Strip or The Troubadour in West Hollywood in 1989, and they'd kill. But times have changed. These guys don't have access to a DeLorean (they may have, but not the Doc Brown version). The next best thing is an album like "The Loner" that takes you to those halcyon days when rock 'n' roll was hip and cool and fearless. If you yearn for rock music that echoes Motley Crue, Alice Cooper and Guns 'N Roses, with dashes of Whitesnake and Winger in the mix, "The Loner" certainly deserves your attention.

The good thing is rock fans is the ‘’The Loner’’ takes off exactly where ‘’RnRA’’ left off. To be honest there’s not enough song writing about the real social issues that the world is experiencing  in the 21st Century. Gene the Werewolf address this with the opening track ‘The Walking Dead’ and its Gene’s take on a zombie apocalypse, and the song itself feels like you’re being attacked around the ears by Rick and Darryl from TMCs TWD! Gene’s vocals are the highlight, but when combined with the full assault package, and not one but TWO solo’s courtesy of Winger/Whitesnakes Reb Beach, it’s a beautiful thang!

‘Boogeyman’ opens up with a bit of Rainbow’s LLRNR riff, but that’s where it ends and the Werewolves vibe takes over. Few bands can match the party vibe of GTW, and only GTW can come up with titles like ‘Too Kool For Skool’; and when he sings ‘’when youre 6’2’’ and got sex appeal you can get any girl you want’’ you know you and the band are in for a great time. ‘The Loner’ is simple rock a la The Rolling Stones/ Georgia Satellites and when its done as simple and as pure as this, its anthemic gold dust. ‘Let It Loose’ takes its lead from AC/DC with a ‘Gene’ twist. If Angus is looking for someone to fill Brian Johnson’s huge shoes, then Gene’s the man! Basically, the way AC/DC are at the moment, if I were Angus Young, I’d do a Ritchie Blackmore and just drop myself into GTW! Problem solved.

The ‘DC’ vibe carries through into ‘A World To Rely On’, and ‘Fortune And Fame’ is the kind of song that cannot fail to have you bouncing off the walls at home playing the air instrument of your choice. If you fail to rock out to this song then you’re completely deaf, or just a twat! ‘Easy Woman’ goes all the way back to 1958 with its Leiber/Stoller salvo from the Elvis Presley classic ‘Trouble’. ‘If You Want Me’ is as melodic and as close to a ballad that these guys can muster. The final song (its come way too quick) is ‘The Best I Can’ and showcases the honky-tonk piano of Randy Baumann of WDVE-FM and slide guitar by The Clarks' guitar maestro, Rob James. Its a great end to a great album!

At just 36 mins long it harks back to the great days of the 80s and vinyl where a lengthy album came in at 45 mins! As a great sage once said ‘its not the length, its what you do with it’ and GTW have done it in style.

In a nutshell, ‘The Loner’ is one of THE BEST ‘party anthem rock n roll anthem’ albums you’ll hear all year (did I mention its got anthems?). Gene The Werewolf are one of your favourite bands that you haven’t got into yet. In a world where AC/DC are clinging onto a rock like a dying limpet, bands like Gene The Werewolf deserve to fill some of the void that will soon be left behind by this great band.

This is essential listening if you long for bands who were ‘your world’ in the 80s – such as Crue, Whitesnake, Y&T, Enuff Z’Nuff, etc, then Gene The Werewolf is a worthy addition to your collection.