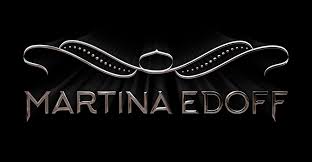 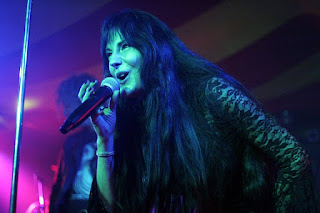 The venue in question, is the soon to be defunct Railway Venue. A unique place, part living room (nice and homely), with all the accoutrements a budding starlet could want; a cracking sound system that perforates ear drums, lasers, and enough smoke to think you’re in the Vatican electing the next Pope. The current landlords (John and Hilary) have done a cracking job of this place and it will be a loss to the rock scene that’s for sure.
Enough of the back story, what about the main event. Well this was Martina’s last stop of a very brief soiree in the UK; first Bilston, tonight Bolton. Apparently she only plays at towns/cities that begin with the letter ‘B’. Go figure. That’s probably why we didnt see her at the recent HRH AOR that is hand made for singers like Martina Edoff – shame on you HRH guys! HRH loss is definitely our gain. 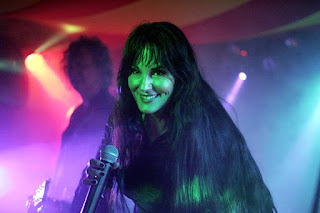 
Despite this being being the second of two gigs, one thing is evident, the band are tight. Edoff is a glamorous as they come; slim, slender, with long flowing black hair and bejewelled with shiny stuff. Despite her very svelt frame she has the power of a cannon ripping through tissue. The 'voice' shouldn’t come from a frame like this, but it does, with some welly that matches the two albums and with no added effects! 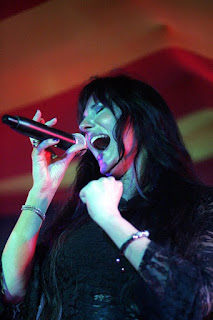 Edoff powers through a lot of the set. The two albums are contrasting, her debut (for the rock community) is more rock country, whereas ‘Unity’ is  Melodic Rock, but both are enhanced by one of the best female (or male) rock singers this side of Stockholm. In fact the first seven songs from the set are all from Unity – with the title track  'Unity', ‘Sound Of Thunder’ and the strangely named ‘I Am Mining’ taking the edge. The latter being a punchy, fun number that soars above the album version, even if it is about ‘mining!!’

‘On The Top’ is the very first song that attracted me to Martina Edoff, A song that’s truly in the vein of the queen of Country Rock – Shania Twain.  There was a bit of a special encore for us crows in covers from both Heart and AC/DC, which were lapped up in droves. Martina Edoff handles Ann Wilsons vocals without any trouble, and that's no mean feat. All in all it’s a very impressive performance from Edoff and her band. Its just a pity that there were only about 50 people there to see it. However, those that did were treated to a little gem of a performance.

Which brings me onto the subject of why so many venues are closing their doors….this isn’t  the case here as the Railway Venue as they really support bands with a great set up. Their imminent closure is more brewery related than a lack of support. That said, Martina Edoff deserved a better turnout than this. And when this happens, its no big surprise that either a) bands fail to return, or b) the more important nature of venues closing their doors.

Get with the plan people, support your venues and the bands that come to play in them!