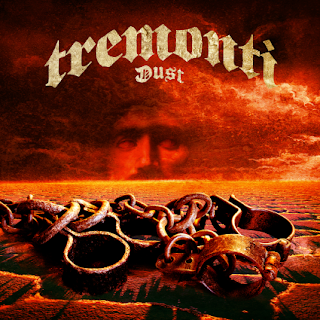 Now is a pretty good time to be a fan of the man riffing machine that is Tremonti. What with Alter Bridge albums aplenty with another one due on the horizon later this year, and this, (Dust’) his third album as ‘Tremonti’ in less than three years, the bloke is positively proilific.

Dust is pretty much a companion piece to last years explosive ‘Cauterize ‘ – review here (http://www.chesyrockreviews.com/2015/05/tremonti-cauterize-album-review.html). Think of it like the current trend to split the last film of a trilogy into two parts (like The Hunger Games, or Harry Potter). This is pretty much what Tremonti has done here. Rather than subject the listener to a major riffage overload that few could withstand on a potential double album, he let the ‘Dust’ literally lie on ‘Cauterize’, before unleashing it onto his public.

The Tremonti band(wagon) is still Eric Friedman (Guitar) and Garrett Whitlock (Drums), along with young Wolfgang Van Halen (Bass). The continuity is paying major dividends. I cant say here that his voice is sounding EVEN better this time around as both Cauterize and Dust were recorded at the same time pretty much.

There is definitely a step change in Tremonti’s vocal delivery over ‘All I Was’. Immediately you can tell ne has grown as a vocalist, and improved quite considerable since the debut album 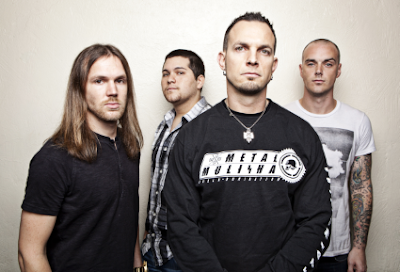 ‘My Last Mistake’ positively comes racing out at you like a horde of zombies, and not those slow buggers, the ones that sprint like they are attached to a SCUD. The riff is a bruising affair indeed. ‘The Cage’ is an example of how to thy to fuck up your drummer, with Whitlock pounding the skins as if the bloke’s an octopus. You know that if an intro contains four blasts of a cymbal, then there’s brutal riffs following the count-in, and here Tremonti doesn’t disappoint! Tremonti hasn’t got the best vocal range in the World, but he knows his limitations and sticks to what he knows is possible. Its not Todd La Torre stuff, but it doesn’t make it any less worthy as the voice fits the song.

‘Dust’ immediately sounds as if it would be perfect for an Alter Bridge album. This is the issue when one has a certain style, its hard to breakaway from the now firmly established Tremonti guitar tone and style. I really can imagine Kennedy chipping in with vocals on this one. Its not at face melting as the preceding tracks and this makes for a very pleasant listen, its more balladic and soaring.

‘Betray Me’ mixes both power and melody to great effect and its probably equal in measure to the light and heavy side of Tremonti. ‘Catching Fire’ is a song to get the blood coursing around your system. All I can say is that Whitlock deserves double pay as the bloke does twice as much as the average drummer. ‘Never Wrong’ is a song that plays second to ‘Dust’ in order of favourites, and has a very 80s vibe to it, with dare I say a touch of Van Halen? ‘Rising Storm’ is basically a Ronseal effort – it does what it says on the tin. ‘Unable To See’ sees Tremonti going out on a high. It’s a truly strong and emotional piece, with its subtle start, rising to a crescendo, then falling back to acoustic…..

Tremonti hasn’t gone for ‘all out Thrash’ on this one and has probably provided his most diverse and interesting Tremonti album to date. I do think that fans of his first two may put this at the bottom of their list, but it’s the most rewarding album for Alter Bridge fans. Whilst Tremonti was quick to point out that Dust is not an album of B sides, I truly believe him. This for me sits more comfortably as a fan of Alter Bridge than the Thrash temple of Tremonti. Its possible that some songs are recycled AB riffs, but who gives a toss. Creed and AB will always be difficult to break away from due to his inimitable style

He has well and truly earned the right to make the albums that please him and not certain sections of his various fan bases. For me, this one, due to its range of songs is the most effective