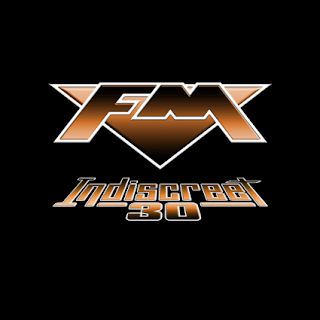 I’ve taken a revised tune on this, as my I-30 album arrived yesterday and it sounds volumes better on CD than a streamed version. Because of a few knob heads, the ‘many’ have to put up with streamed versions of an artistes blood, sweat and tears to review!

Thirty years have passed (yes, you heard me, THIRTY!) since FM released their most beloved (and debut) album Indiscreet. Apparently they have been asked many times in the past about re-recording their classic album, and that day is now here. From my very early days in seeing them on the 'Tough It Out' tour, I have always said that some of these songs sound under-produced, especially when some of the live versions had a certain amount of ‘welly’ to them especially as it lacked some of the ‘punch’ that was being achieved on albums coming from the other side of the Atlantic.

So I stepped forward with little bit of (dreaded?) anticipation of what they have done. Why mess with their definitive album? Well, for one, modern techniques should put the expansive sound in, and it’s also quite cheap to re-record what FM would have spent a small fortune on with Portrait back in 86. FM have been playing most of this album live for the last 30 years, so the recording should be a relatively easy and the songs well worn in.

Apparently the seed was sown whilst recording the follow up to Heroes & Villains, where they decided to put down a backing track to ‘That Girl’ to see how it would sound with the apparent huge sounds they were achieving. It gave the song a new dynamic that was not possible in the 80s. This is what has led them to give these classic songs a new lease of life. Thankfully, FM themselves realize that they cant just re-create the original which is sacred in many of the eyes and ears of their faithful fans. Basically, it’s the 2016 FM (still brilliant) with the sound capability of 2016.

You’ll be please to know that Merv didn’t dig out the DeLorean and reclaim his Alec Guinness ‘white suit’ from the That Girl video, or pink (!) jump suit, and thankfully, Steve and Pete shaved off their mullets a few years back.

2016 paints a different picture. The line up is now very well established with Jim Kirkpatrick on guitar, who has given FM a fresh new injection of energy, and, youthfulness to the FM repertoire. However, I personally think that none of this would not be at all possible if it weren’t for one thing – that ‘thing’ being Steve Overland’s voice. It’s as good today as it was back in the mid 80s when I heard Wildlife. Very few singers still have ‘the voice’ they had 30 years ago, but SO is one of them.

After just one quick listen, nothing much has been changed, subtle differences, the odd slight intro difference, but mainly the solos, bridges and general excellence of Indiscreet have remained on ‘I-30’.  ‘That Girl’ is a classic, both then and now. Where the original lacked some polish, the new version has been polished to within an inch of its like, sounding full and vibrant. , ‘Love Lies Dying’ has a new added guitar solo, and only ‘Hot Wired’ fell a little short for me. The ‘reasons to buy’ column for me come in the shape of ‘The Other Side Of Midnight’, which is punchy and polished and a proper kick in the nuts, ‘American Girls’, a song that should have catapulted them to the US market is fresh as a daisy, and ‘I Belong To The Night’ has some added depth and bass. Also the last three – ‘Face To Face’, ‘Frozen Heart’ and ‘Heart Of The Matter’ further add weight to the whole concept. The changes are small, there some added nuances in Jim Kirkpatrick’s guitar playing, and some of the vocals, but not too much that you can really notice. Subtlety is good!

Seven bonus tracks round out ‘I-30’, and the ‘biggie’ and real bonus for me is a song that never made it onto Indiscreet, but is of that era, and they have pulled out an absolutely storming version of ‘Let Love Be The Leader’. Also FM have recorded a brand new song for this, and that is ‘Running On Empty’ a now typical 21st century FM type song, an upbeat and all round feel good track that FM fans will lap up. ‘Shot In The Dark’ is the song that made its way to Ozzy via Phil Soussan (and he no doubt made a shit-load on the back of it) and this gives a feel for the alternate (but equally enthralling) FM version had it have been recorded in this style at the time. The final track ‘That Girl’ (Acoustic) is one of the best covers they have ever done, very soulful and is a personal fave of closet FM fan, Mrs. Chesworth.

There may be a few ‘naysayers’ proclaiming that FM shouldn’t have re-done it, but I for one am very happy, as some of these songs sound fresh and lively as they did when I first heard them on cassette, only now with added ‘oomph ‘ where it belongs.

Indiscreet 30 isn’t pointless. The songs have been given the love, care and attention they deserve with a more ‘modern’ sound and twist, and ‘I30’ sits perfectly as a companion piece to the original. I can’t give it more praise than that.

What started out as trepidation and caution, ended in praise and jubilation.