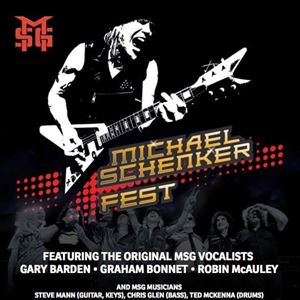 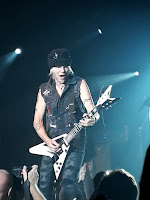 Many months ago I got the chance to review the then ‘one-off’ MSF DVD that took place in Japan. (Review here - http://www.chesyrockreviews.com/2017/02/michael-schenker-fest-live-review.html ) I got a bit misty-eyed watching this gig, especially when I think back to Cozy Powell, and thought how great it would be to have him alive and involved in something like this. It would have been the cherry to top all cherries.

Thankfully, someone had sense to take this on a wider tour. It was announced for the UK. YAY! I’m not sure if ticket sales had been poor as it was recently announced that Sheffield was offering a 33% discount via the people at HRH. Bastards!!! Not HRH, just the fact that tickets were heavily discounted. This tactic worked. Whilst the balcony wasn’t really utilized, the floor was pretty packed, and these punters had excellent foresight.

Schenker these days is a completely different bloke to the poor state he was in 10 years ago. Upon entrance, he was happy, beaming with joy to be precise, and this immediately shows in his playing. In fact on the opening salvo of ‘Into The Arena’, its probably the best I’ve seen him since the early 80s. In fact, this happiness seems to have rubbed off on all of the band. All of the 3 vocalists stints – Gary Barden, Graham Bonnet and Robin McAuley, are interjected with an instrumental classic – ‘Into the Arena’ for Barden, ‘Coast To Coast’ prior to Bonnet, and ‘Captain Nemo’ for McAuley. 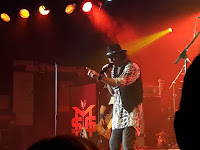 Barden is first, and while he doesn’t have the voice of Budokan, he still handles his vocals with charm and polish. There’s nowt vocally from ‘Built To Destroy’, all of Barden’s are classics from the first two albums, ‘Let Sleeping Dogs Lie’, ‘Victim Of Illusion’, ‘Cry For The Nations’, ‘Attack Of The Mad Axeman’, and ‘Armed And Ready’. Such is the enjoyment, thirty minutes goes past in a blink of an eye. Chris Glen, looks every inch the star (and nutter) as he was in the 80s, and with Ted Mckenna the groove is well and truly covered. McKenna’s Bass drum, and Glen’s bass notes pummel your body with the groove. Steve Mann, the youngest at 61 (I want whatever he’s drinking!) handles the rhythm and keys excellently. My only gripe, no ‘On and On’, which is probably my fave MSG song of all of them. Gutted. 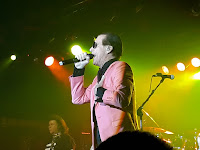 Graham Bonnet looks every inch the fashion icon as he was in his Rainbow days. The guy looks resplendent in his aviator sunglasses, black shirt, red tie, salmon jacket (yes…..salmon!) and jeans ‘n sneakers. It took him just a minute to joke about the infamous incident at Sheffield City Hall some 35 (ish) years ago, when he got his knob out when he was pissed as a fart. In this venue, instead of pulling out his willy, out came a banana. You rock guys…..! The excellent ‘Desert Song’ from the underrated (not in my house) ‘Assault Attack’ was up first, followed by ‘Dancer’ with Barden and McAuley on BVs, with ‘Assault Attack’ bringing up the rear. Bonnet is almost 70 and is in amazing nick. Chris Glen stated this was the first time this song had been heard and having Bonnet back in the fold was superb. 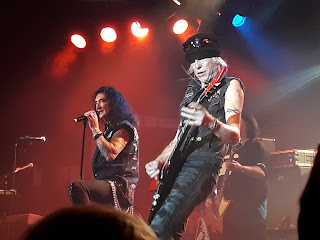 Robin McAuley’s voice (whilst no spring chicken either) is identical to his Grand Prix and McAuley Schenker Group days. Superb vocally, he has no right to still be this good! ‘No Time For Losers’, ‘Save Yourself’, ‘Bad Boys’, and the superb ‘Love Is Not A Game’ and ‘Rock Bottom’ covered his stint. McAuley looks every inch the star, and went down a storm. The solo from Schenker for 'Rock Bottom' was just sublime.

The encore continued in the UFO vein with stellar renditions of ‘Doctor Doctor’ and ‘Lights Out’ with all three taking on vocal duties.

I was looking forward to this, after seeing the DVD a few months back, but in reality it was much better than I expected it to be. Schenker was stunning, wringing every note out of his various flying V’s (Dean), and it was a joy to witness up close. Being in a happy place suits the guy.

If I’m honest, this is the set list I’ve been itching for on the 4 times I’ve seen Temple Of Rock, this was as good as it gets. The only icing on the cake would have been Michael bringing in Rocky Newton, Paul Raymond, and I would have desperately loved to see the late, great Cozy Powell just one more time.

I'm not 'age-ist', but I would like to state that the total age on show here tonight was 452! In fact, what I saw tonight was a band that was better than the MSG I saw on the 'Rock Will Never Die' tour in '84. Remarkable stuff. Well done fellas, and thank you for a superb night.

Personally I think it’s a mistake having two gigs (Sheffield and Manchester) so close, which is why I think sales of the Sheffield gig were being pushed. That said, at £30 it was value for money, but if you paid the 20 quid, then it was probably the best value gig of the year by a country mile.

(Note - As a regular gig go-er, not necessarily to Sheffield, watch out for those thieving NCP bastards next to the O2. £17 for four hours. Now for my next review of them in Trip Advisor!)