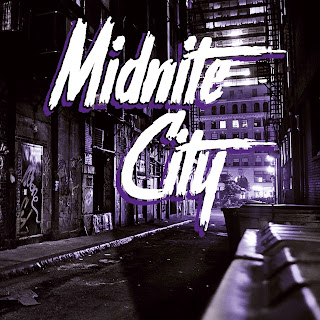 Midnite City were formed at the beginning of 2017 by current Tigertailz front man Rob Wylde (he was meant for that job by the way!), and former Vega, Steevi Jaimz and Teenage Casket Company.

He was armed with an albums worth of material (35:34 if you’re following VHs first epic, or 130:23 for Dream Theater's last effort), thankfully Rob’s idea turned out to be a trim 45min! Anyway, he approached Pete Newdeck to produce three songs for him to shop around record labels. Rob played guitar, bass and handled vox, and Newdeck played drums, provided BV's and mixed the songs. Wylde brought in Miles Meakin on guitar, and former Vega band mate James Martin (keys). Three songs were mixed by Harry Hess and were picked up by AOR Heaven.

With a deal in place, Newdeck was officially on board, joining Miles Meakin (guitar), and Shawn Charvette (keys).

Looking at Rob, the lad was born to be in a band. He looks as if he’s just walked off the Strip. That’s the L.A. one, and not Blackpool.

The opening track, ‘We Belong’ is absolute melodic rock heaven. It has the perfect blend of crunch in the riffs, and melody in the song to make it a strong contender for shortlists come the end of the year. It’s pure ‘80s. ‘Ghost Of My Old Friends’ is a bit of a creeper. After repeated listens, it just gets better and better. ‘Summer Of Our Lives’ is one of the three songs used to clinch the deal. It certainly ticks the ‘anthemic’ box when it comes to the chorus, a feel-good Summer track for sure. ‘Nothings Like Losing You’ follows on in a similar vein. Four songs in and the production so far is as sweet as a nut, very clear, everything sounds great, no dullness, mushed up sound – all instruments clear as a bell, and every single word of Robs vocals understood. May not seem like much to you, but to me its heaven! 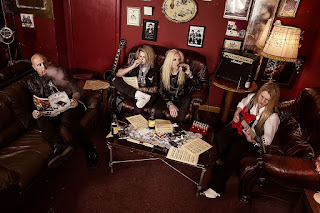 ‘Last Beat Of My Heart’ is another of the highlights from MC. The bloke knows melody, I’ll give him that. ‘Everything You Meant To Me’ shows the more balladic side to Midnite City with its stripped back sound, and will be a sure-fire hit when played live. ‘Can’t Wait For The Nights’ is akin to the style of The Radio Sun, more ‘pop’ than ‘rock’ but all the same its still enjoyable. ‘One Step Away’ has this chugging guitar sound and refrain that Rick Springfield seems to have trademarked. Rob sure likes his ‘top down Summer anthems’, and chuck in some ‘whoa-ohs!’ and the Summer season continues with ‘I Just Cant Take It’. ‘Things She Said’ sounds like it might be a down beat track, but even this has the ability to be uplifting, especially with Newdeck’s quality BV’s adding to the charm. ‘ Think About You’ , one of the ‘three’ that got them this deal, as a great way to round off a very solid and promising debut.

Midnite City have recently added bassist Josh ’tabbie’ Williams to the line up, that will make it a perfect fit, just like the one fingerless studded leather glove that Rob probably wears around the house to do the washing up!

It’s Frontiers that are pushing out the volume of melodic rock, but AOR Heaven seem to have signed up the quality.

There’s nothing new about this album as its been done before, but I do think that what Rob and the guys have come up with is an album that is very good indeed. I’m expecting it to be on quite a few fave lists, mine included.