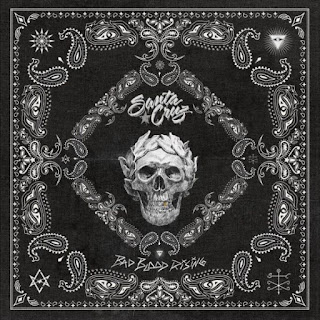 I have a theory about Finnish rock  & metal bands, once they have finished college they have to do a years National Service (something that would benefit the ‘yoof’ of today here in the UK who expect everything on a plate). I'm certain that a part of this National Service is to start a band, such is the number of Finnish bands!

They have been praised by Rolling Stone mag as ‘One of the Top 10 bands you need to know in 2017’ for their ‘debaucherous, flamboyant flair’. High praise indeed.

They are partnered with a new label M-Theory Audio. Previously they were with Spinefarm. So what about ‘Bad Blood Rising?’

'Young Blood Rising' gets the album off to a powerful start with is more of an anthem for the disaffected youth, aimed squarely at arena rock and a blistering guitar solo. ‘River Phoenix’ uses the audio from the police call on that fateful night. It enters into a pop rock affair that seen on the likes of Scuzz. Decent, but not captivating enough. ‘Fire Running Through Our Veins’ tries a lot harder to be different. Its thumping enough, but its like there's a formula being laid down with similar choruses to the previous tracks. 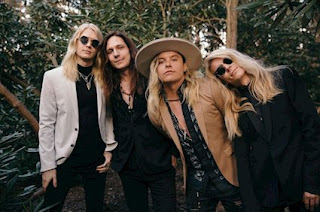 ‘Drag Me Out Of The Darkness’ is a mid paced song that does not grab you by the balls and make you listen.  “Breathe’ with its whistling opener, thankfully doesn’t morph into Winds Of Change. Archie Kuosmanen has a decent voice, but this, along with ‘Back From The Dead’ and ‘Breathe’ are clearly not playing to his talents. ‘Voice of a New Generation’ is the kind of song that Shinedown do better. Its good, but it could be bigger and better. ‘Pure Fucking Adrenaline’ does what it says on the tin – it’s a Metallica x with Crue x Megadeth style song. ‘Get Me Out Of California’ is more on the melodic rock/AOR side, and after the opener, it’s the second best for me on the album, its more Mr Big than Mister Crowley. Another 4 or 5 of this quality, and it would be a great album.

Santa Cruz showed some good touched early on in their career and have had some success in their native Finland and snared some decent tours.

Glam was almost dead in the early 90s. Whilst there are a few keeping its head afloat, I don’t see many making a killing out of it. I cant say that I don’t like this but there’s not enough on here that’s decent enough to make me ‘love’ it.

There’s too much ‘average’ being settled for by labels in the Melodic Rock/AOR/Sleaze these days. I’ll certainly go watch them live as I think that some of these will come across a lot better than they do on the album.

Santa Cruz will return to the UK in December for a headline tour. Dates for the run are: