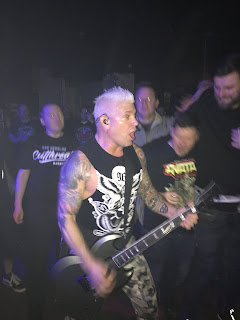 Billy Bio received 9/10 for his album ‘Feed The Fire’ which I reviewed back in November and rightly so. You can read the review here. An album of stunning quality which deserves all the acclaim it will get.

Tonight, in what used to be a pub many moons ago, the small yet massively unique Rebellion Club in Manchester once again hosts a quartet of bands with massive potential.

Firstly, OMV. A heavy punk rock/hardcore unit with bags of charisma on stage. Only Richie, the lead singer and founder of the Merseyside band has his face on show. The rest choose to stay concealed behind masks. Pretty cool. As for the music, this is a pure onslaught of angry hardcore with awesome speed changes. There’s lots of Pantera and Slayer knocking around within these guys. Well worth catching live if you can. A great start.

Next up were Sonnet 13. Manchester based, although singer Bartek and drummer Lukasz I believe are Dutch(?) These were very D.R.I/Mucky Pup to me. They had that late 80’s thrash punk shout to Bartek’s voice. This is my kind of era and the guys pulled off a worthy set.

Cutthroat LA earned my respect straight away by refusing to play until the crowd came forward. A great move I thought because it worked a treat. If any band could warm a crowd up nicely for BillyBio, it’s these guys. They got everyone involved from the start. Inciting mosh pits, getting fans on stage. Their interaction with their fans is nothing short of perfect. Using political issues to express their feelings, these guys really know how to deliver proper hardcore. Throw in some street rap/punk/thrash. These guys have it all.

And so to BillyBio. Words cannot describe what a stunning and powerful set this guy delivered tonight. Playing virtually everything from his latest ‘Feed the Fire’ album, we were also treated to some Biohazard classics in the form of ‘Shades Of Grey’, ‘How It Is’, ‘A Lot To Learn’, ‘Love Denied’ and ‘Punishment’. Throw in a cover of The Exploited’s ‘UK82’ and you have a set so powerful and true that the only bad thing about it was it went too fast. 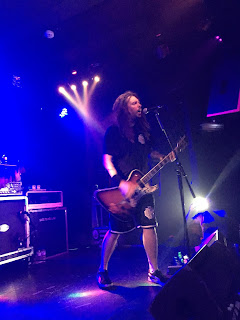 Once again crowd interaction was a major part and everyone, indeed, played their part. What I find particularly impressive is that Billy wears a head mike which gives him so much more scope to move around and interact with the crowd.
Seeing such an iconic hardcore legend in such a small venue always gives me that shiver down my spine. Arenas are not for me. This is where music lives and breathes, in venues like The Rebellion club, with fantastic friendly people all looking out for each other. Long may it continue. And lets prey BillyBio returns soon.