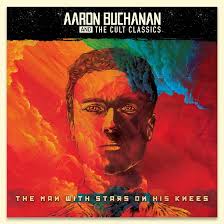 Aaron Buchanan And The Cult Classics – The Man With Stars On His Knees
I always love it when a band I’ve never previously heard of just blows me away. These occurrences are not too frequent, but when you encounter Aaron Buchanan and the Cult Classics at HRH AOR come out and rip the place apart, you know when ‘special’ really means SPECIAL. I was unprepared for the human explosion that is Buchanan. A whirlwind of energy and seems like he has either a death wish or good healthcare insurance as he seems hell-bent on doing time in Stoke Mandeville hospital for some sort of spinal injury! Whilst they are nowhere near an AOR band, I welcomed their appearance, as they were one of just a couple of bands that took the place by storm. It was only when they played a couple of songs by Heavens basement that I managed to put 2+2 together. Of course. Whilst HB dallied around for quite some time, I think now Buchanan has his own vehicle to display his considerable talent, he will eclipse anything that HB have done, and lots, lots more.

A definite Rising Star award, or New Band award should have been in abundance in for them the last 2 years.
Backtrack to 2015 and Buchanan bailed out of HB and straight into the studio with producer James Curtis-Thomas, guitarist Ryan Woods, and sister and guitarist Laurie Buchanan. Prior to this, Curtis-Thomas and Buchanan had spoken a lot about producing a record with deep, mature and colourful content.
Their debut album, the strangely, but excellently named, ‘The Man With Stars On His Knees’ hit the digital stands in '17. But fast-forward to 2019 and ABATCC have signed a deal with Listenable Records in France. So what we have is a Special Edition of the Debut with a couple of extra studio tracks on the vinyl, and an additional three live tracks on the CD.

Show Me What You’re Made Of is fairly short, and leads you into the album nicely, just as you expect a big crescendo, it ends (unfortunately) but only to lead into ‘All The Things You’ve Said And Done’ a powerful kick in the nuts song that demands your attention. Its full of attitude, swagger and a song for the masses. Its Queen/The Darkness meets Halestorm, and dare I mention them, Alter Bridge.

‘Dancin’ Down Below’ instantly grabs you. Its underlying riff and anthemic chorus leave you breathless. If you haven’t seen ABATCC, I can assure that he can keep this pace up for a whole gig, its not just clever production. You get tired just listening to them! ‘The Devil That Needs You’ is classic rock for two thirds, followed by a final third that is something the US Army would use to break down Terrorist cells in captivity. ‘Journey Out Of Here’ is about as poppy and ‘normal’ as they can be to mainstream (if Aaron can ever be called ‘normal’!?). It’s a nice build that is up-lifting in its composition and is both light and dark at the same time. If that makes sense? Title track, the wonderfully named, ‘The Man With Stars on His Knees’ takes you on a journey, and it’s a song that is sooo good it just belies belief. A modern anthem in the making. It pulls in influences from Kiss, to Mott, to ELO and lots in-between. Phew.

A God Is No Friend’ is a nice slow burn, with Buchanan sounding like Layne Staley and AIC. There’s some nice guitar work going on here, giving it plenty of atmosphere.  Still in a bit of an Alice In Chains moment ‘Left Me For Dead’ is a dirtier, grungier song than anything previous. I like the fact that there’s plenty of variation going on here and everything is precisely and deliberately in its place. ‘Mind Of A Mute’ is Soundgarden by any other name, and reminds me about the good bits of grunge and its ‘wear you down’ guitar riffage (that killed off all my hair metal bands in the early 90s!). ‘Morals’ is just grandiose, and revoked Freddie Mercury and Queen. So, that would have been it, but now we have a couple of new tracks fro the reissue. ‘Fire In The Fields Of Mayhem’ is a great song for a single release, and just sums up what ABATCC are all about. Finally we’re  at the sharp end with ‘Undertow’, and its verse draws you in for the guitar solo. Its probably the most diverse song from the rest, and its an opportunity to hear Buchanan just sing, and it’s a worthy closer.

If you want to take a punt on a new band you haven’t heard yet, I’d put all my money on Aaron Buchanan and the Cult Classics. Other bands take note, the bar was already high, this reissue has raised it further.

If you don’t like the album or his live show, I’m honestly tempted to say I’ll refund you myself.