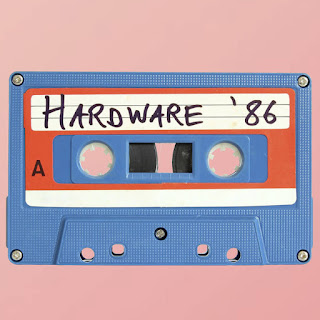 Hardware 86
These two guys are men of few words. Im assuming that they are letting their music doing the talking. The PR info is limited at best – ‘The band ‘Hardware 86’ takes you back to the sound and the vibe of the late 80s hard rock scene. They celebrate a shameless cocktail of heavy guitars, soft synths, melodic leads and big 80s drums’. That’s it.
The band is Rune Aalberg Alstad (guitar/vocals) and Sigurd Ekle (bass/vocals) with assorted musicians filling in the gaps.
I was not wrong. Hardware 86 reminds me of the time I first heard Work Of Art. Thinking that no one was really serious about bringing back the AOR of old, Hardware 86 are doing their best in following the likes of WOA in their musical direction and output. When they state the late 80s they aren’t kidding. The opening bars of the opening track ‘Arena’ you know 100% that these guys walk the walk, and talk the talk. They couldn’t be more 80’s if they tried. I am half expecting Rick Springfield to kick in with vocals – a good time song if ever I heard one. If you like band like Atlantic, and Red Dawn, then this is right up your street. ‘Share This Love’ has more of an ‘edge’ but it is right in Work Of Arts wheelhouse. Rune’s vocals are perfect in this genre, and is born to sing AOR. ‘Summer of ‘91’ is one of those songs that regales of days gone by, singing ‘where did the Summer go?’ It evokes Robin Beck and is the type of song that Billboard was full of in the late 80s, as it leads towards pop more than rock, and ends with the same outro as Kiss’ ‘Forever’. ‘Sagittarius’ is standard ballad fodder and has been done to death before
It’s a sharp fall off in quality for the last couple of songs in ‘Cheezyfiction’ and ‘TLM‘. ‘Cheezyfiction’ would be right at home on an 80s B Movie montage clip on something like FX- Murder By Illusion or an 80s porn film, and ‘TLM’ is like a mix of styles coming together without any real direction.
Both are a bit of a let down. Only because it’s a 20 min EP. Had it been longer I wouldn’t mind an instrumental, but would have left it from this selection of songs. That said it fits their sound, but the EP just doesn’t need it, or cut it for that matter.
If Hardware 86 had developed more songs like the first two tracks it would be an album that would make the AOR community sit up and listen. Its a solid 'B' for effort, but they have shown they have the songs in them to do good things. I'd look at getting another 6 songs together for an album and build it around 'Arena' and 'Share This Love' as they have the foundations for a good album.