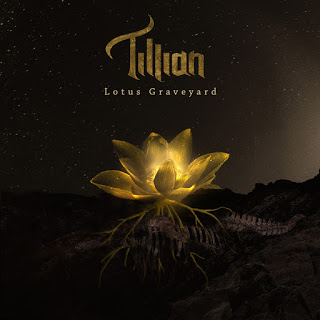 Tillian: Lotus Graveyard
I’m new to the band Tillian but I do like bands of the same genre and I’m always happy to discover new and exciting artists.
Tillian's offering, 'Lotus Garden' is an extremely well produced album with a highly polished sound and extremely well composed. Leah has an excellent voice and she switches between an almost ethereal sound to an operatic powerhouse and Leah has no problem utilising her entire vocal range.

Tillian are not afraid to musical styles several times during one song however although it has been done really well there were times when I felt that it affected the flow of the album.
I’ve had 'Lotus Graveyard' on repeat for several hours now and it is growing on me, I’m picking up different nuances every time I listen to it and it does pull you in and I would really like to hear and see how that transfers to a live setting
In my opinion 'Lotus Graveyard' is a solid album and it fits nicely into the same genre with bands such as Delain and Within Temptation but on a mellower scale.
At the moment I’m giving the album a strong 7.5/10 but that score may go up with future listens. This is a good debut album, I’d like to hear what they’re capable of doing with future releases.
I definitely suggest putting Lotus Graveyard on your shopping list
Review by Marc
Score 7.5/10
Tillian are:
Leah Marcu Lead Vocals
Alexandra Marcu Cello & Vocals
Inbal Rosenhouse Keyboards & Vocals
Opher Vishnia Guitar & Vocals
Yaron Gilad Guitar
Alon Shulman Bass & Vocals
Gil Idan Drums