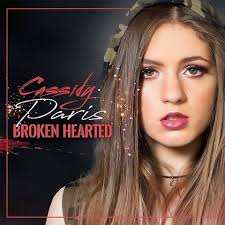 I have had Cassidy’s EP on spin for a few days now, and after her debut last year, she is coming on leaps and bounds. I do have a bit of form here as I am well aware of dad Stevie’s output, but having this knowledge does not affect my reviewing. What I will say, is that anyone (so young) who proudly wears a Dokken ‘Back For The Attack’, Cheap Trick, Butch Walker and Enuff Z’nuff tees, certainly starts off with a few more brownie points than they should.

Anywho, on to the EP. ‘Song For The Broken Hearted’ is the lead song, and if you like your pop-rock delivered with a large amount of sass and attitude, with copious amounts of ‘head flicking’ to hammer home said sass, then you are in the right place. It’s the right song to lead the EP as its by far the best on offer here. Production values are big to say the least, the chorus is great, with enough guitar to make it more on the heavier side, and some good harmonies. If fact, more established solo artists would kill for a song like this one.

‘Walking On Fire’ sounds a bit auto-tuney, and is more electronica until we get to the catchy chorus. I suppose its good to mix up a few styles to draw in a potentially bigger audience. It’s my least liked on the EP, but it’s a good enough song, its just not my cup of tea. It is certainly made a lot better with the strength of the chorus. It’s a song that could lead to a Eurovision appearance for Australia now that they are in the EU!!

‘Stand’ is the type of song that has the potential to be a big anther for Cassidy. It’s a close second to ‘Broken Hearted’. It has a bridge section similar to Coldplay's ‘Clocks’ (I’m ashamed I know this), and dad rips it up nicely with a guitar solo. I’d really like to see (hear) Cassidy explore her upper range a bit as this could be an absolute cracker with some soaring vocals fuelling the chorus.

‘Talk About It’ has been around for some time now (Aug 2017), and deserves its place here. It’s a song that launched Cassidy, and is in the style of an Avril Lavigne, Pink number. Its catchy as hell, and the riff is in the vein of Rick Springfield, and is a close a song to dad’s band The Radio Sun as can be, although Jase Old doesn’t sing about boyfriends!!

One thing I will say, is that all the songs here are accompanied by some good videos if you check out her YouTube page. Lots of bands would only go for one video, but Cassidy's done the lot. I doubt any cost a packet, but with the kit available today its good to see someone packing it all in across all media outlets.

In such a short time, Cassidy is turning into quite the artiste and performer.