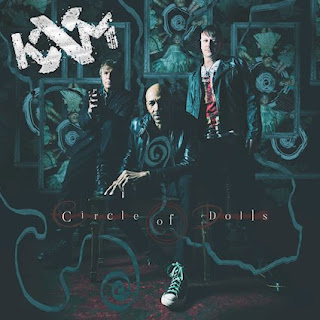 KXM — which derives its name from a combination of its members’ other projects (K from KORN, X from KING’S X and M from LYNCH MOB) — issued its self-titled debut in 2014. The 13-track follow-up, “Scatterbrain”, was released on March 17, 2017. Now the band is back with a stronger and awesome new album which - in George Lynch’s words - “it’s better than the first two. It’s insane. The magic’s there, the chemistry’s there, and we’re just sitting here patting ourselves on the back, telling each other what geniuses we are!”

KXM is comprised of dUg Pinnick of King’s X on vocals/bass, George Lynch of Lynch Mob/Dokken on guitars and Korn’s drum maestro, Ray Luzier, rounds out the powerhouse trio. The band takes its name from the combination of the member’s other projects: K from Korn, X from King’s X and M from Lynch Mob.

KXM formed in early 2013 when dUg, George and Ray spoke about trying to jam together. At the time it wasn’t clear what would come from those jams. The only thing that was clear was that these 3 musicians, at the top of their game, wanted to play together. The self-titled debut, KXM, was born from those jam sessions and is now an important piece in each band member’s musical legacy. In a world that constantly searches for new and unique music, KXM delivers all the power and punch that one would expect from these high level players!

First of all I just want to say that dUg Pinnick (fuck only knows why he spells Dug ‘dUg’) has just turned 69! Sixty-fucking-nine! He could pass for someone in their forties, never mind someone fast approaching 70!

If you’re expecting something Kings X / Dokken / Korn related, then you’re not in luck. If anything, its closest to Kings X, but that’s down to Pinnick’s unmistakeable vocals. ‘War Of Words’ is fast and phrenetic, and signals its intent from the off. ‘Mind Swamp’ has a bit of a trippy and hypnotising opening riff, before a more metal riff ensues. For the guitar solo, Lynch plays it like a prog rock song that current Opeth fans would expect, and is not your typical Lynch expectation. Which is cool. Its makes for one of the best songs on the album

‘Circle Of Dolls’ is a more straightforward track, with a cool drum pattern from Luzier. Three songs in and there isn’t a pattern to their style. I guess they guys just bounced ideas, jammed and recorded whatever juices flow out. ‘Lightning’ coughs up a slow groove, and particularly plays to Pinnick’s vocalisation. The guy still sounds great! It proves to be another highlight.
It’s a long song and the whole song plays out and is given time to breathe and isn’t forced. Lynch gets some strange sounds out before a passioned solo sees out the remainder. ’Time Flies’ has more of a relaxed opening, before soaring. I have to say that Lynch’s guitar playing is something else.

’Twice’ kicks off with a very ear pleasing ‘poppy’ groove, if ever KXM could be poppy? This is as close as it gets to being mainstream radio `U~S friendly rock. ‘Big As The Sun’ starts off with a punchy bass and drum riff, but its Lynch’s guitar playing that takes this up a level or three., whereas for ’Vessel Of Destruction’ its Luziers drumming taking central stage to it Korn-esque roots. It shows the looseness and flow of their playing that I’ve been trying to describe, but only a song can prove. ‘A Day Without Me’ has an acoustic country cowboy opening, before the groove belting with Pinnick’s bluesy wail proving as effective foil.

‘Wide Awake’ is one of those songs where they just let Lynch off the reins, wound him up and let him go. The solo is a meandering, soulful, and one that if it were the 70s, would go on for days and days. ’Shadow Lover’ has its foot set in the 90s, it’s a dark sounding Pinnick, with a resonance to his vocals that make the difference. ‘Cold Sweats’ is one of the couple of songs that has some harmonies vocally. Finally its ‘The Border’ is hypnotic and trippy, but most of all, topical. Some say musicians and actors should keep out of politics, buy I feel they have a much stronger voice than the establishment what you to think.

I have to say that Circle of Dolls is a varied tapestry of music. KXM have weaved various styles and themes that reward the listener with something different for each and every song. Its good to see 3 musicians performing at the top of their respective games still and given the opportunity to play it out as they have here.

I still think Lynch is the guitar God he has always been. Pinnick’s vocals are mostly undiminished considering his age. Im not ageist, but we expect our musical idols to sound like they did in 1985. And Luzier adds to the tryptich with some sterling drum wizardry.

If you’re already a fan of KXM, buy this album, as its my fave yet. If you’re new to KXM but a fan of Pinnick, Luzier & Lynch, buy it. Tell you what, just buy it anyway. I think though, in being able to see and hear these songs being played live, would be something else indeed.

Circle Of Dolls is scheduled for release on September 13th via Rat Pak Records.