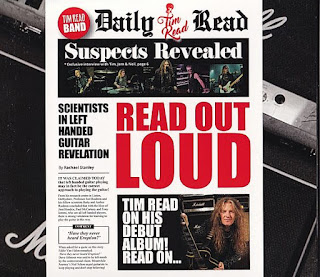 If you’ve ever been to gigs across the North West, and especially the wonderful venue that is Eleven, there’s usually a guy in attendance that you know is a bit of a kindred spirit and looks the part like he should be in a band. Tim has had his talons into some very decent bands, such as Demon, Chrome Molly and probably the best tribute band I’ve ever witnessed, Limehouse Lizzy. The bloke has got some serious chops….and a black book to kill for.

If you’re going to do a debut album then why not drag in some great mates to join the party. First to be in on the act was Demon drummer Neil Ogden, then they enlisted the services of producer and Demon member Paul Hume (owner of Eleven), and the three laid down the basic tracks for the album. Once completed the final pieces of the jigsaw were made, with FM’s keyboard tinkler supreme, Jim Davis joining the ranks. And last, but by no means least the band is rounded out with Josh Williams. Before I’ve heard the album (apart from the live launch), I’m excited to listen to it as I’m expecting harmonies to die for as all the guys involved in Tim’s band can certainly sing.

‘Surrender’ opens up as bit like FM’s ‘Tough it Out’ with police sirens wailing, before an ‘ever so 80s’ sound that makes me go info a comfort zone of wonderfulness of bands like Only Child, Blue Murder et al……and as expected there’s harmonies a-plenty. Read has a gravel and gruffness to his tone that does not detract from the songs. I was expecting more polish in his style, but its a good contrast. Read delves deep into his musical influences - from the Valley Of The Kings/Kashmir/Judgment Day influenced  ‘Nowhere To Run’, to Down To Earth era Rainbow (oooh I love me a Hammond organ) ‘Close To You’, Theres a full red blooded high octane Malmsteen like ‘The Girl Is Trouble’, ‘Playing With Fire’ has undertones of April Wine’s classic ‘I Like To Rock’, only with more menace and thunder, and there’s the classy ‘In My Heart’. Six songs in and Read is cooking with gas!

If you ever wondered what it would sound like if Phil Lynott made a band with Steve Harris (Iron Lizzy?), the outcome is ‘Are You Out There?’  A good homage to a great guy. ‘Staring At The Sun’ is the ‘big’ track on the album for me, it has that Blackmore, Kotzev guitar with the underlying organ. As a big rainbow fan, it ticks a lot of boxes for me, and it is fab. ‘Talk To Me’ opens up like it could be metalised Abba! ‘Take No More From You’ pulls everyone in for a highlight of their talents. ‘You’re My Angel’s’ piano sound evokes Styx, and is the poppiest sounding song on the album. ‘Don’t Go’ is apt for a final song, as I found I wanted to listen to it all again.  This shows another side to Reads persona, it’s a ballad that screams ‘class’ from high and Read plays like one of his Lizzy cohorts Brian Robertson on the solo. Its a great ending for a great debut. I’ve changed my mind. THIS is the big song on the album!

I was VERY pleased with this cracking debut from Read. A mix of influences but with both his feet firmly planted in the golden era of rock. Unless Ive got it all wrong of course! Read has himself some great songs, pulled together one hell of a blackmail list of participants, and plays his part like any leader should. It’s not called ‘Read Out Loud’ for nothing. In fact it does exactly what it says on the tin. Only sing it loud!

In the current Covid-19 crisis it’s a difficult time for everyone, musicians in particular. If you can spare the money I can think of no better way of supporting the music we love and send some of it Read’s way.

Waiting For The Sun

The Girl Is Trouble

Are You Out There?

Staring At The Sun

Take No More From You