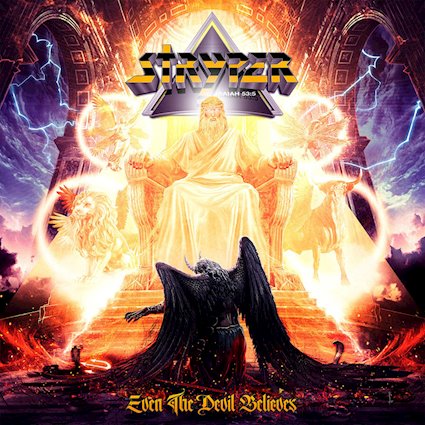 Stryper - Even The Devil Believes

Back in the mid 80s a good friend of mine used to go to a good friend of his (who back then had a stellar record collection, and still does) to make me some mix tapes. It was his attempt to get me into what was basically hair metal. Ratt, Tesla, Loudness, TT Quick, Fifth Angel, Cinderella, Joshua, etc., etc., Its a long list of bands! It took me years to track down the albums of these bands for myself. I loved all the bands, and I particularly liked Stryper. The cassette tape introduced me to ‘Make Me Wanna Sing’, ‘Battle Hymn Of The Republic’, and ‘Loud And Clear’. I have been a fan ever since. Few bands to this day from that 80s period are making new music, even less are turning out good stuff. In fact I think Stryper are on a (rock that makes me) roll as their last 3 albums have been some of their heaviest, most consistent and dare I say it, some of their best. They would even make the hardiest of fans give up lent in favour of these three (now make the four!)

Its always been a hard sell to your peers that you like Stryper. I don’t know why. I’m not religious, though I would like to have faith. Is it because of the religion? The wardrobe? Or some of the ballads that graced MTV back in the day? I don’t know, and I don’t really care. I’ve never been one to be taken in my a lyric. I do have a few, but this is where I probably sell myself short as I go for melody, riffs and how a song makes me feel rather than delving into the meaning. Whilst I don’t go for the faith aspect, I have however absorbed their music almost religiously. I’ve bought every album, I read Michael’s book (we both have a best way of having toilet roll presented), and that was a honest and open story. I saw them in Italy, something I never thought I would ever do, and sang the first three songs in a harmony with Rob Evans and Sweets wife (!) and have interviewed Michael and his dog a few years back.

Anyway, I am in the camp of Stryper maintaining the heaviness of the past few albums. I’m not against the ballads, but they were always on the sugar sweet side for me, too sugary. The recent 3  albums have kicked some serious balls, so I’m hoping for the trend to continue here with ‘Even The Devil Believes’. What can I say? Well, my hope and wish is well and truly granted. Like the four horsemen of the apocalypse Stryper come galloping over the horizon ready to conquer with a gut wrenching riff and banshee wail courtesy of Michael Sweet. As you would expect, harmonies are a thankful given, and there’s added welly from the prince of pound and the new bass groove in Perry Richardson. Its a sterling opening track and is 80s metal personified. ‘Make Love Great Again’ should be subliminally played across the US to combat the hate and division that seems rife, without getting too political. We all need some love in our lives, right? Sweet (M) has his feet firmly planted in the 80s as the guitar work is worthy of this period when bands like Stryper ruled the waves - both FM and UHF!

‘Let Him In’ is short and snappy and gets to the point, sharply with its simple but effective chorus. ‘Do Unto Others’ is the lightest song so far in, but even this rocks, and I particularly like the guitar solo. If you’re going to go big, then it should be on the track that the album bares its name, and ‘Even The Devil Believes’ almost gets there. The guitar tone ifrom Sweet and Fox s great and has some fab harmonies as you would expect, but I just wanted more, going for the jugular in length and scale. It’s still a good song, but I want them to deliver a ‘Heaven And Hell’ moment for me. ‘How To Fly’ dips its toes into the 70s for a section that is very ELO/The Beatles inspired and delivers in both its modern and past sound. ‘Divider’ is a cool song, and brings all the best parts of Stryper into one song. I know that’s every song, numbnuts, but very much so here. ‘This I Pray’ goes very Bon Jovi/Poison, with the stirring cowboy ballad. As Stryper ballads go, this one goes to eleven. Give me a song like this over the syrupy ones every day of the week. In fact, for ‘This I Pray’ Micael Sweet out-Jovi’s Bon Jovi!!

‘Invitation Only’ is bright, and ‘pop-py’ and its the chorus and harmonies that bring this up to what could have been a bit standard affair. ‘For God - Rock ’n’ Roll’ makes me want to dig out my spandex, foil covered cucumber, leg warmers and guy-liner as this would be welcome on any of their 80s output. It’s a little belter. In fact, I think it’s my favourite, and it should be an immediate addition to their live set. ‘Middle Finger Messiah’ is fast and frenetic and is I great title and a great song to finish off the album with.

With ‘Even The Devil Believes’ if this were the last album, then it would be some way to finish off as I/we can’t really expect our 80s heroes to be producing music some 35-40 years later. The fact that Stryper are, and are doing so at such a level, and absolutely kicking arse is a (new) testament to their being. If they do continue then I look forward to being in the front seat and preaching from the hilltop as to how great they are.

Michael Sweet cant hit the high notes as regular as he did in the 80s and that suits me. The voice has mellowed, it’s still one of the best in metal and he can pick his battle (hymn of the republic) when he goes high. When he does, it still makes me go all goosebumpy. He still remains one of my favourites. I’m a firm believer that a lot of the output from 80s bands hasn’t been as good as it was back in the day (thats nostalgia for you), but even the blind, and deaf can see/hear that Stryper are in the best period of their career.

After listening to this, I get it. Even The Devil Believes.

Even The Devil Believes