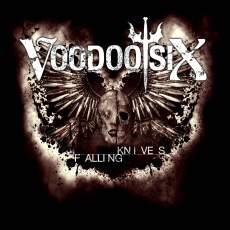 Well its been quite a while since I last reviewed Voodoo Six, 2008 to be precise, for the First Hit For Free album. Boy has a lot changed since then. Gone is the original vocalist and half Venetian mask toting Henry Rundell, and in is the powerful Luke Purdie who seems to have given them an added ‘kick’. Anyone who has heard ‘Fluke?' will back me up.

Voodoo Six are set to release much‐anticipated new EP entitled ‘Falling Knives’ in digital format on November 28. The EP, which will be a special limited edition release, will be available to fans until the end of February. The band will precede the EP release by kicking off their 14‐date UK tour in Leicester on November 17. The tour will finish with a set at this year’s sold‐out Hard Rock Hell V Festival in Prestatyn.

The new EP will feature three brand new tracks, the eponymous 'Falling Knives', 'Sharp Sand', and 'Stop', as well as three re‐worked and re‐recorded versions of tracks from the band’s debut album ‘First Hit For Free’.

First to the re-jigged versions. ‘One More Day has come on leaps and bounds from the original. Heavier, chunkier, and with added welly, Purdie’s, vocals now giving the song an extra dimension. The exact same can be said of the other two reworked songs, with ‘No Friend Of Mine’ being the pick of the three

The new songs on the EP, opening track’ Falling Knives’ goes from 0-60 in 3 seconds. It contains one of the best riffs I’ve heard these guys do, and Purdies style fits this Southern/Classic Rock vibe perfectly. ‘Sharp Sand’ brings together the best of Foo Fighters with C-4  enhanced riffs to rip through your speakers (or headphones). ‘Stop’ is a decent enough track but is probably my least favourite of the three. But in saying that, all of the new stick, kicks some serious ass over the re-jigged versions. One thing I will say is that the production values are absolutely first class and make the debut cd I have sound like it was recorded in a shoe box

Similar to what I stated in 2008, the future of British rock is STILL in good hands, only this time they have a much better chance of becoming one of the big boys