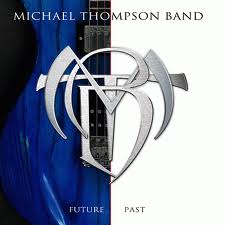 Michael Thompson is one of the leading guitar players of the world. He was awarded the "Distinguished Alumni" award from his alma mater Berklee College of Music to commemorate his contributions to the music industry. Berklee's program for the event noted that "he is widely regarded as being among the elite studio session players, and his amazing list of credits includes such prominent names as Michael Jackson, Whitney Houston, Celine Dion, 'N Sync, Toni Braxton, Phil Collins, Rod Stewart, the Scorpions, Vince Neil, Christina Aguilera, Michael Bolton, Mariah Carey, Bette Midler, Madonna, Babyface, En Vogue, Gloria Estefan, Stanley Clarke and Ricky Martin." Quite a list of luminaries to perform with/for!

Originally from New York, Michael moved to Los Angeles in 1979 to begin a studio musician career. In 1988, after working to try and get a deal with his band Slang, he finally got signed by Geffen Records to release one album entitled "How Long", under the Michael Thompson Band (M.T.B.) monicker, and is one of the best examples of AOR/Westcoast from that era (or any era!), and it was reissued in 2007 with 3 bonus tracks

For ‘Future Past’ Michael has teamed up with singer Larry King from the band Soleil Moon. Larry brought a new and more rocking approach to the MTB sound but certainly the trademark elements of songwriting and melodies are still to be found in the new album “Future Past”. In fact the album plays on the up tempo sound of Toto, and the first Giant album, so that cant be a bad thing

‘High Times’ picks up where ‘How Long’ left off, as an up tempo rocking number full of an instantly catchy chorus and a great riff. ‘Can’t Be Right’ continues in a similar vein and shows why MT picked King as his vocalist of choice. ‘Future Past’ is a smooth as a velvet glove and really highlights Thompson’s guitar prowess. ‘When You Love Someone’ is just a delight of an emotional ballad and is swallowed whole by the excellence of ‘Here I am’

I have to mention the reworked ‘Can’t Miss’ from the 89 debut as I’m running out of superlatives for all the other tracks. It’s still a great song, and Karry King runs the original very close, but I will always prefer the original version. That said, ‘Future Past’ is a strong enough album without this reworked classic

On its first listen I wasn’t exactly over enamoured with it. However after living with this thing for a couple of weeks, it’s probably one of the finest AOR albums you (and me)will hear all year (and its only Feb). If I had to pick a winner between the Sunstorm and MTB albums, ‘Future Past’ delivers the goods in abundance

Tracklisting:
High Times;
Can't Be Right;
Future Past;
When You Love Someone;
Here I Am;
Beautiful Mystery;
Break Me Down;
End Game;
Gypsy Road;
Can't Miss 2012;
Fight For Your Life.
Posted by aorwxm at 21:28