Cryptex - Good Morning, How Did You Live? 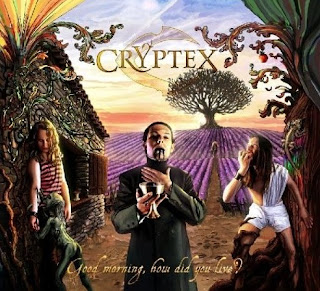 Now normally it’s correct to review an album just before its time of release. In this instance it’s all down to band I saw supporting Pain Of Salvation recently in the UK (Check out the live review), and I just want more people to give this band a listen. ‘Good Morning, How Did You Live?’ was released back in May 2011, and I’m disappointed that I’ve not heard this band previously, but I feel that I need to put this right

To be totally honest it’s almost obscene that three (young) German lads from Salzgitter, Germany can churn our quality Progressive/folk rock like this in the 21st Century. I’m not against the good people of Salzgitter, just that fact that these three can produce music like this. They’re in their young 20s for Gods sake! They shouldn’t have influences and a sound like this. I’ve got gig T-shirts older than these three

To say that their music is a bit all over the place is an understatement, and a fact that shouldn’t be taken in the wrong context. It’s this eclecticness that makes Cryptex an interesting band indeed. Mastermind behind their style is one Simon Moskon (Keys/piano, bluesharp, harmonica, bass, and even didgeridoo!!) a Noddy Holder lookalike, but that’s where the similarity ends. In fact he’s more in the Ian Anderson mould, but in this dimension its Ian Anderson morphed with Freddy Mercury, Richard O Brien, Meat Loaf, Tim Burton and some off kilter US Broadway! And the music is as interesting as you could imaging this collaboration to be. Moskon confidently holds the keys (and tambourine) to their future success 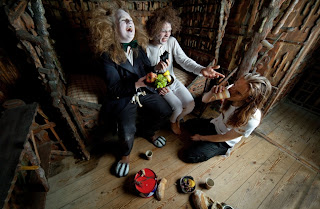 Also, NEVER judge a book by its cover as the CD cover makes them look like the bastard offspring of Jim Henson's Muppets and Robert Smith (Cure), and you're still only half way there! This alone could put many off from their brand of folk rock

'Hicksville, Habitus and Itchy Feet' is a great opening track, which just soars around you. Martin Linke on guitar handles himself impeccably, not overplaying and keeping it all simple but essential.    ‘ Dance of the Strange Folk’ is right out of Tull’s locker, and is just a strangely addictive song with great harmonies from all. 12 months ago neither Ramon or Linke sang at all, you wouldn’t think so! ‘Freeride’ is a song straight out of a dark Tim Burton-esque Broadway musical. ‘ Bagheera’ unfortunately does not wax lyrical about the Jungle Books black panther, and is again short, sweet and neat. ‘Its Mine’ builds takes the pace down gently before building the pressure right up for the final third, and is a great song performed live with Moskon showing his blues chops off on the harp. 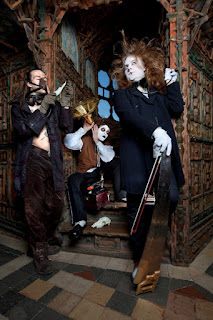 Imagine the conversation in the studio ‘Now Herr’s, I’m going to open up the next song with me on the didgeridoo. Any questions?’ Well Prog-Folk fans, ‘Gypsy’s Lullaby’ does just that. I’d hate to be Moskon's tech guy on tour!! ‘’Guitar? Ya! Piano? Ya! Harp? Ya! Bass? Ya! Kiddies Glockenspiel? Ya! Aussie wooden drainpipe thingy covered in spit? Ya!’’

‘Camden Town’ is influenced after Moskon’s stay in the capital with his girlfriend complete with recording stolen from London Underground. Its leans more towards 70s classic rock than anything so far, with Ramon Heig’s drumming is all ‘rat-tat-tat’ like a machine gun! ‘Leviathan’ follows suit, heavy with the Queen school of vocal harmonies kicking in for good measure. ‘  ‘Alois’ is where ‘Cryptex’ shine the most, stripped down and full of power and emotion. ‘Most Lovable Monster’ is as heavy as Cryptex get, yet it’s rocking one minute and subtle the next.

I must admit I can’t find much fault with this album. The multi direction of the songs may put a few people off but to me it’s all an exciting ride from beginning to end. All of this quality from such a young trio! Cryptex deserve, and fully I expect them to go very far in the future. I can’t wait for the next Album.

If you get the chance to see them supporting pain of Salvation on their current Euro tour, take it with both hands. They won’t disappoint