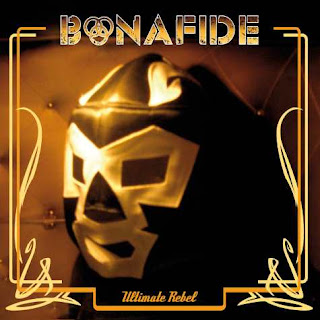 I make my apology from the off. Up until now I have not heard of Bonafide! I’m surprised that this is their 3rd album, but after a listen of Ultimate Rebel I will make sure that they will be high on my playlist from hereon in.

To keep it short and sweet, BONAFIDE was formed by singer/guitarist Pontus Snibb in Malmö, southern Sweden, in 2006. Joining him is fellow guitar player Mikael Fässberg, drummer Niklas Matsson and bass player Martin Ekelund. Their mission statement : to play Hard Rock the way it´s supposed to be played: True to it´s roots in the electric blues and early R´n´B. Well that’s a mantra they have well and truly lived up to.

In October 2007 they released their debut, simply titled "Bonafide". Immediately they became quite busy playing the Scandinavian club and festival circuit, and supporting bands such as Deep Purple, Europe, Status Quo, Y&T, LA Guns, The Quireboys and countless of others in arenas and theaters.

In January 2009 they locked themselves into Musicamatic studios in Gothenburg, Sweden with acclaimed producer Chips Kiesbye (The Hellacopters, The Nomads) and began to record their second full length album, titled "Something´s dripping", released world wide through Black Lodge Records. The album raced to No 16 in the National Swedish Album chart, beating both Megadeth and Ace Frehley with whom they shared release date!

Bonafide are well on the way to becoming a (very) well known and, more importantly, a kick ass act. With riffs that are built on the concrete foundation of bands like AC/DC and melodies that are as infectious as the Ebola Virus, Bonafide have hit the jackpot.

Opening track ‘Make My Own Rules’ has all the frenetic  fire power of AC/DC, only with a better vocal range!!  ‘The Mess’ has a basic (but powerful) riff that hits you in the chest with the same fury as Mjölnir!! Not only is this a review, it’s also educational!! It also has a melody that screams ‘single’. ‘Blue Skies Red’ is more of a melodic rock riff, with Snibbs vocals sounding more akin to Scorpions at their very best (only without ze German accent!), and is a definite highlight. With songs as good as these, Bonafide would have sold millions 25 yrs ago. Nowadays I'm not so sure, but they still deserve to sell the modern equivalent of ‘shitloads!’

Sorry for the DC comparisons, but Rag and Bone Ban is straight out of the Angus Young guitar riff school of AC/DC riffs and could have appeared on the very best AC/DC album. I don’t give a flying fuck for the likeness, it’s a great song. Pick A Widow (Youre Leaving) is not only a contender for best song title of the year. If the likes of Airboune can make a quick leap to the big time, expect Bonafide to do the same, and go even higher.

Bonafide wear their hearts on their sleeves and Ultimate Rebel is just an excellent album chock full of riffs and amazing melodies. It goes straight into my Top 5 albums of 2012, and I doubt if anything else will take it out in the remaining months of the year. From hereon in other bands will be making comparisons with Bonafide. A Classic Rock band in the making and my new favourite band!