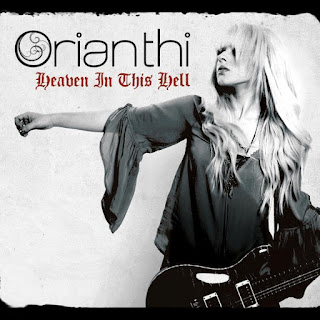 If it wasn’t for a (very) guilty pleasure I would never have come across the Antipodean Steve Vai…Orianthi. The guilty pleasure being American Idol. I cant stand the UK shite, but I’ve been hooked on AI since Season 4. A couple of years ago AI got Orianthi on to plug ‘According To You’. Now I wasn’t taken back by the song although it was a grower, I was attracted to the shredding in-between the lines. Damn, she was good! I got “Believe” and her other earlier effort, “Violet Journey”. Both were OK but I felt that her record company was pushing her to be a heavier/rockier version than the very first AI Alum, Kelly Clarkson. This is great for the US market but pretty shite for most other countries. I was chuffed when she got the Michael Jackson comeback gig only to be stuffed when he died. Then more recently she got the axe-slingers job with a certain Mr Cooper

I was keen to listen, and very pleased to get this CD in the post to review. There is a marked difference and bloody big improvement with Heaven In This Hell compared to the other stuff, but there’s more than a nod to her past which needs a good cleansing. I put this down to being more in control of what she wants to do, and the comparative support that comes from a label that knows what to do with an artiste like Orianthi. 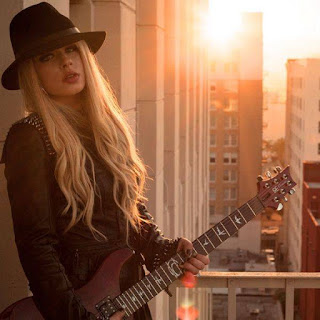 Immediate the change hits you in the face (and ears!). Gone is the overtly insipid US radio sound, and has been replaced with a more Southern Rock / Blues / Country feel (and its for the better). Title track, and opener “Heaven In This Hell” really sets her stall out – a tub thumpin’, rabble-rousin’ butt kickin’ belter. Orianthi’s voice having more of a rock rasp than previously heard, and coupled with a more blues rock, she’s out to make her mark. “You Don’t Wanna Know” is a blues/country fuelled little ditty with ‘hit’ written all over it, a sure-fire contender for 2nd single. Good thing is, shes not letting rip every chance she gets, letting the substance of the songs doing the talking. “Fire” is a low down and dirty Blues number which should rid her of her young followers with any chance! Hopefully they’ve given up listening by now. “If You Think You Know Me” borders more on the old Orianthi, a power pop/rock number. “How Do You Sleep” is another Gary Moore/Bo Diddley effort – but I don’t know if she’s had too much of a hard life to be singing the blues! It’s a welcome change from the previous stuff, so that alone makes it worthwhile and more listenable. Once you get to the mid point, Orianthi’s past resurfaces and it becomes more of the heavy Clarkson sound, but with a little more maturity than the likes of “Believe”. That’s not bad, per se, but I’d prefer it if she could stick with the first half ass kicking vibe, rather than some music by numbers seen in the second half

Lots of people can play guitar, but very few have substance. She’s not there yet but on first listen to this, she’s well on her way to becoming a bonafide rock star and a global one at that.

I think that she needs to take a step back and decide what comes next, as her playing is of a standard that few can match, and that is where her future lies, either as a shit hot guitarist, or as a part of a bloody good rock band.