2013 sees the second Steelhouse Festival situated in one of the finest places on Gods Earth.....Wales! High on a mountain top on the edge of the Brecon Beacons (Aberbeeg), Steelhouse boasts the highest festival in Europe, and probably one of the nicest organised and atmospheric. For atmospheric, read torrential rain!

A great little site, with camping set aside for the usual nutters, and family area, complete with hot showers and toilet facilities with a host of food, and more importantly beer outlets

After a great evening in the sun and getting rat-arsed on the Friday night, the weather (rain ranging from drenching to the Welsh version of a Tsunami) totally kicked in and stayed there for the remainder of the event. First of all a couple of bands literally had their day in the sun...

First band up. Fireroad. With their very infectious blend of blues and rock they certainly were a popular choice, voted onto the Fest by listeners to a Facebook & Twitter/YouTube Battle of the Bands competition. See, rock fans do do what they are talking about. With songs like 'Your Summer Sun'  which was Record of the Week on Radio Wales, and their new single and is a great slice of a driving rock tune. For some reason singer Richard Jones hates Before The Matinee and never wants to play it again. Don't worry but, Im sure that Axl feels the same way about 'Paradise'! Judging by the amount of nodding heads, Fireroads objective was well and truly achieved.

With festivals its hard to please everyone and the mix can please everyone. That can be said for me with Dead Shed Jokers and Fighting Wolves. Not that there was anything wrong with them as the audience gave great responses. In the case of DSJ they were bit too indie for my liking, and FW were too shouty but thats just me I'm afraid.

In the case of Hand of Dimes, they were the first band to really make me sit up and take notice. A reunion of ex-members of Welsh cult AOR-sters Kooga.  Singer Nev Macdonald has a voice that deserves to be heard on a wider scale, even more than his Skin following. With proper anthems, like ‘Looking At You’, and ‘Stranger In My Home Town’, these guys got the first big roar of the day. Fantastic band, and even greater singer.

The Temperance Movement turned out to be one of the best new bands I’ve heard in quite some time. Think 'The Black Crowes' only better in my opinion, bloody better. In singer Phil Campbell, they have a bloke who is both mesmerizing and engaging, with a set of pipes to die for. Couple this with the rest of the guys and The Temperance Movement will be playing the like of arenas in no time. Songs like ‘Know For Sure’ got the audience involved on a shite day, and the band jam on ‘Smouldering’ was just wonderful. It doesn’t stop there, ‘Pride’ and ‘Aint No Telling’ were just mesmerizing, and I for one didn’t want them to end. For my mates (and no doubts many others) they were the hot band of the day. One word review….Wow!

Anvil, were at the beginning of thrash one of the founder members. Yes, others have come and left them running behind, and theres probably a good reason for that, but what they lack in quality of some of the songs, they make up in Goddamn enthusiasm, and in Robb Reiner they have one of the finest drummers of his generation – just watch him go on Swing Thing. Classics like Mothra, 66 and Metal on Metal were banded out along with newer songs like This is Thirteen, and Badass Rock n roll. Yes they are as corny as a tin of Jolly Green Giant, but they are well loved

The few that know me are aware that FM are probably my fave band of the last 25 years. These reviews of theirs tend to write themselves. Only FM at this point could stop me from jacking it all in and going back to the car, or home, as I was as wet as a dolphins armpit and spirits were well and truly sodden. Steve Overland undoubdtedly has one of the best voices in the business, and when he warbles his ‘whoa-oohs’ women (and me to be honest) get goosebumps. Classic both quite old – That Girl, and I Belong To The night, and new classics such as the magnificent Crosstown Train, and quite heavy for FM…Wildside, pair up extremely well and I think that FM are definitely in the best shape of their 26 year career. Whereas Magnum would be allowed an encore in the same slot on Sunday, for some reason FM didn’t or weren’t allowed to. Never mind, they are still THE finest at their craft in offering polished and well crafted songs. Catch them on Radio 2 and of course Planet Rock! 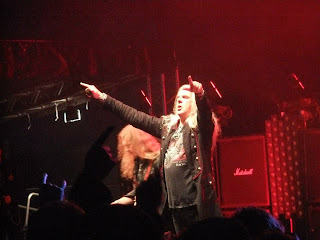 Headliners Saxon are a different proposition. One of the founders of the NWOBHM they tended to lose their way a bit in the 90s for no fault of their own I might add. On this evidence, Saxon were firing on all cylinders, and have years and miles left in the tank should they want to. The ‘Eagle’ got its first UK outing in 20 years, and even without all the lights, pyro, Saxon would have still kicked arse! Biff Byford, despite being a young 62 has a great a voice as he ever did, and he’s spritely for his age! The new album, Sacrifice got some airing early one, but the icing for me was the latter half which was peppered with Metal anthems from Saxons great history. 747, Strong Arm Of The Law and a stunning blast of Dallas 1pm was the absolute highlight for me. Biff won the award for best into for a song…”This one’s made of steel…and it’s got fuckin’ wheels on it!” Crusade, Denim and leather and finally Princess of the Night made up the encore and it will stay with me for quite some time. And the whole thing was being filmed for ‘The Saxon Chronicles 2’. My mate said that Saxon haven’t done a bad gig in 30 years. Do you know what, he’s spot on!

I sware I could write a travel blog just covering the antics of the boys over the course of the weekend! Sleeping in a field after the gig had finished, spending £65 for the weekend only to sleep thru most of it. Bringing Welsh delicacy Pot Noodle and Smash only forgetting to bring a kettle, and drunken bastards falling thru my tent, but giving me one of the best weekends in years!

Despite the weather the organisers deserve a big pat on the back for putting on a great set of bands and organising the best festival I've attended in yonks! Long may Steelhouse continue