Day 2 started off in a similar vein. Sunshine followed by bouts of intermittent monsoons. Again day 2 was kicked off by a band voted on by listeners to a Facebook & Twitter/YouTube Battle of the Bands competition. Blackbyrd, hail from just down the road, and it must be something in the water, as singer Phil possesses a great set of pipes, much better than the songs you can find on their site, with their voted song, ‘Day Of Reckoning’ the stand out track of their set and a nice sing-a-long from the fans to get the crowd warmed up. Apparently Phil has ditched the guitar to concentrate on his singing, and by the sound of him, its bloody well worked a treat. One to look out for methinks in the future 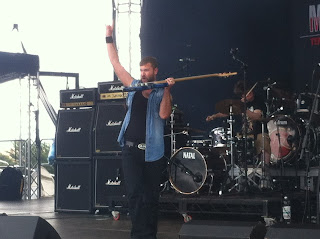 I’ve had the pleasure of witnessing Skam before, and boy have they gone up a notch since then. This was their very last gig in support of their debut (well worth the £10 of anyone’s money) and the Leicester 3 piece pulled out all the stops. Bassist Matt Gilmore deserves an extra special mention, as the guy is a bonafide nutcase on the bass. He pulls shapes, moves like a maniac, and when the road crew for the even start coming from behind to view from the side and laugh, clap, and smile, then you know you’re onto a winner. Skam are destined for greater things Im sure, and with songs about penises (‘Weapon), and anthems with killer hooks like ‘Dead From The Waist Down’ (I think another song about penises), and a new belter called “From The Bottom Up” ( I think there’s a trend going on here guys!). Finishing the set with their best song ‘Massacre’, starting off with a dark Sabbath riff before kicking you in the nuts with such ferocity it feels like a 5 piece. I don’t want to big them up but their meet n greet queue was about 5x the size of Anvil’s (and about 50x of Schenker’s). See I told you the Welsh fest revelers know a good band when they see one

I could have sworn that Trucker Diablo were Southern US rockers, but they have their roots planted in Northern Ireland, hopefully the deep south of N.I. Opener ‘Rebel’ is as good as anything BSC have come up with, and is a powerful tour de force of an opener, getting the crowd well and truly on their side from the off. They possess a bit more oomph than BSC, and have a bit of raw power thrown in like Alter Bridge just for the fun of it. ‘Whens It Gonna Rain’ is as equally a stunner as the opener, and new single ‘Drive’ proves that TD are definitely on the way up in the world, and anyone that has a song like ‘Drink, Beer, Destroy’ is a winner in my books, and just like The Temperance Movement they were one of the talked about bands of the day. No ballads to see here just out and out rock n roll 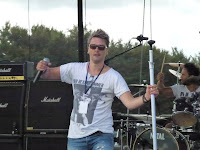 Vega are gaining a reputation as one up the new wave of melodic rock batton holders for the UK. Never one to shy away from an anthem, Bros Martin have their pens set to Def leppard Hysteria mode, and what with modern beauties like ‘What The Hell’, ‘Back To Life’ and ‘White Knuckle Ride’, Vega set their phasers to stun mode. New guitarist Daniel Johanssen got a run out and fits in very nicely adding vocals to an already full on wall of sound. Nick works the crowd extremely well and is proving to be a really decent front man. Not a great deal to say other than spot on, and as good as ever!

Heaven’s Basement are a completely different proposition to when I last saw them play my local in Wrexham a couple of few years back. I have to say it’s a change for the better. Not so much polished now, as some of the set is like being repeatedly hit in the back of the head with a nail gun. In a good way of course! Here to promote (and batter us) with a set mainly from their latest album which is a belter by the way, as they proved with the furious opener ‘Welcome Home’. Throughout the course of the gig, singer Aaron Buchanan is an absolute livewire, think Tasmanian Devil only with a better singing voice. God only knows how he can keep up that noise and tempo for a full set. ‘Heartbreaking Son Of A Bitch’ (Ballad lads?) and the full on metal assault of ‘I Am Electric’ really got the crowd buzzing. I hoe they now get a settled line up as this one deserves its day in the sun 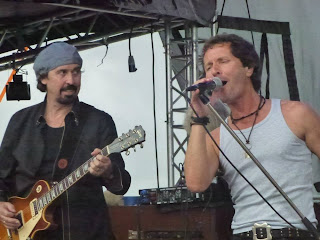 It’s like going from dark to light, from HB to Snakecharmer who, play a very different kind of music to the previous whippersnappers. Drawing on music from their debut and with some Whitesnake classics thrown in to boot, Messers Moody, Ousey, Murrayj James, Wisefield, and in for the day Stanway, they provide probably the most polished and classy set of the day. Ousey's voice is just something else, from such a small frame comes this soulful boom. Yes the fans really appreciate the new songs – ‘Guilty as Charged’, ‘Accident Prone’, ‘Nothing To Lose’ etc, but its when the Whitesnake classics come in that they get truly excited and becomes a sea of a Welsh choir. ‘Ready an Willing’, ‘Walking In The Shadow Of The Blues’ (this one in particular is a very nice version). Moody does his Steel Geetar solo, and its hardly changed since I first saw Whitesnake back in 82 (my first ever gig!). The best was saved until last, ‘Slow an Easy’, followed by a torrential downpour which saw a lot of the crowd vacate to the beer tent. But it made for one of the best moments of the weekend…when the intro played for ‘Here I Go Again’, the whole beer tent erupted and sang along as one, for one of those moments you will carry forever, before they finally finished with ‘Fool For Your Lovin.’ 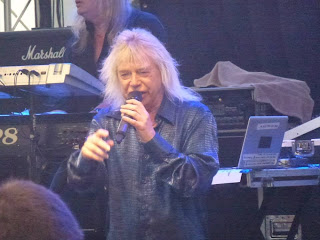 Magnum at this point were running rather late. I used to be a fan in the 80s, but the reformed stuff of recent years has completely passed me by. Which is a shame, as I hardly knew the first half of the set. They obviously had a fair few fans of their own at the event as there was lots of singing along and people mimicking pointy Bob. If only he had a pound for every time he pointed, he’d be a multi millionaire! For me it was all about the classics, ‘How far Jerusalem’, running back from the bar for ‘Vigilante’, and they even managed to fit in an encore for ‘Days Of No Trust’ and the underrated ‘Rockin Chair’. Years ago, they nearly broke away and became huge, but despite this, Magnum still put on a hell of a show. 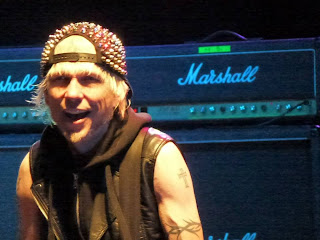 Michael Schenker a few years ago couldn’t probably get arrested. Whereas the last couple of year has seen a true return to form, tonight was the very last night of their extensive ‘Temple Of Rock & Lovedrive Reunion’ tour, and bugger me, they weren’t half on form. A fine line up consisting of Ex-Scorps Rarebell and Bucholz, and multi instrumentalist Wayne Findlay and Doogie White. No messing around from the guys, straight into ‘Lovedrive’ with White proving to be a fine replacement for Mogg, Meine and Barden. All previous Schenker bands were included – Scorpions, MSG, UFO, and even a couple of songs from the current line up – a tribute to Ronnie in ‘Before The Devil Knows Your Name’. I was never a massive UFO fan, my fave album is ‘The Wild The Willing & The Innocent’, so I suppose I don’t count as a UFO officionado at all. The classic UFO songbook was played, ‘Shoot, Shoot’, ‘Only You…’, ‘Let It Roll’, ‘Too Hot…’, ‘Lights Out’, and ‘Rock Bottom’. Obviously they hit the spot with the 2 blokes next to me as they both went mental. Me, I loved the instrumental renditions of ‘Coast to Coast’ and ‘Into The Arena’, and a couple of MSG classics such as ‘Armed & Ready’ and Attack Of The Mad Axeman’ which I haven’t heard live in almost 30 years!! Shit dudes, they even played the MSG underrated ‘Assault Attack’. Unlike Saxon, there was no frills, lights, pyro, just full on rock classics spanning a total of 30-odd years. Long may he continue to play, because it was fan-fuckin-tastic!

So, two great days spent with a great bunch of people, met friends, made some new ones, and, despite the shite weather I cant wait until the next one. Despite missing my 2 wedding anniversary on the trot (23 yrs - O think its Ker-plunk for 23??) Im still married. Sarah, Sally-Ann can I suggest a weekend either side of this next year please??

Photos courtesy of Michelle French
Posted by aorwxm at 14:05