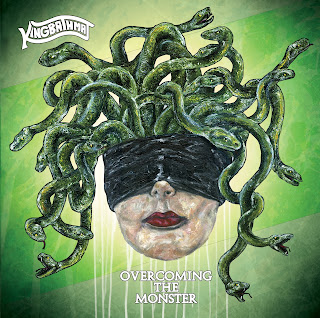 Late last year I had the great pleasure of Reviewing the last album from King Bathmat, their sixth! Just a few months later, hot on the heels of Truth Button (released only in Jan),  comes ‘Overcoming the Monster’.

"Overcoming The Monster" deals with the theme of psychological obstacles (monsters of the mind) that are manufactured in our thoughts, both internally through our insecurities, externally by the outside influence of others and collectively through the mass media which uses fear as a tool to manipulate our perceptions. "Overcoming The Monster" addresses the need to ignore these clandestine forms of control and rise above the Illusory obstacles that are placed in our path in order to deliberately block opportunities that should be accessible to everybody.

As was the case with Truth Button, King Bathmat throw everything at the listener, - sink, worktops, cutlery, even the taps and the Bathmat, in a musical fusion of sounds, textures and genres such as Progressive Rock, Grunge, Psychedelia and Experimental Rock to concoct a vibrant intoxicating brew of complex, intricate melodies and heavy bludgeoning riffs all contained within a running time of approximately 50 short minutes.

Sentinel for examples starts off all subdued like a Storm Corrosion/ Steven Wilson vibe, before letting a cross between STP and Alice in Chains rip into you. Its compelling stuff indeed! ‘Parasomnia’ is a sleep disorder that involves abnormal and unnatural movements, behaviors, emotions, perceptions, and dreams that occur while falling asleep, sleeping, between sleep stages, or during arousal from sleep! I can tell you now, Ive not bee so excited by a prog band in quite some time like this one. It starts off as a calming 70s psychadelic piece, before upping the tempo considerably to a more 2112 Rush era rock piece with the Foo Fighters thrown in for good measure. These boys are not your run of the mill Prog band. ‘Superfluous’  has the elements of grunge from the likes of AIC and also nods in the direction if modern prod like Dream Theater. ‘Reality Mining’ is a single contender, mainly because it’s the only bugger under 5 mins

KingBathmat really are a clever band, possibly a bit too clever for their own good. But I don’t care, as they are one of the most diverse and refreshing prog/experimental bands to come out of the UK in some time

I really hope that King Bathmat get the opportunity to get on a couple of decent tours this years because they deserve their music to be heard by a greater number of people. They are one of THE best bands you’ve never heard…..YET! I honestly feel that strongly about KingBathmat that I wish I was in the position to offer anyone a money back guarantee, but Victor Kiam I ain’t