Virgil And The Accelerators - Army Of Three Album review 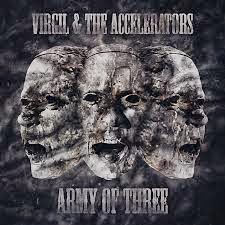 Moments come along every now and again when you are completely taken aback by a bands performance. The occasion was at Parr Hall Warrington about 18months ago, whereby the then unknown to me, V&TA took to the stage and completely blew me away within the first minute. I knew for certain that I was watching someone special, very special indeed. Albums don’t do bands justice on many an occasion, none more so that the debut, vs the live performance I caught that night....

....and the even more annoying thing? That they were kids when it was recorded. Damn you, you talented set of buggers! 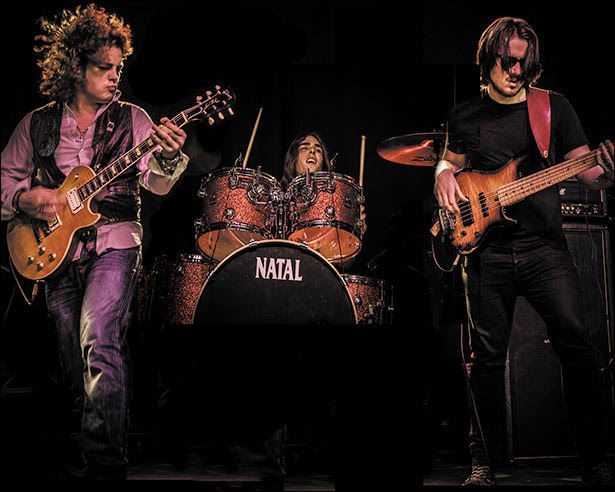 VATA are Virgil McMahon, the guitarist/vocalist and driving force behind the band. A talent from a very young age who joined his dads band ‘The Accelerators’. Such was his talent that his dad and fellow band member Hugh Morgan had the foresight to get Virgil to form a band with people his own age. So Virgil and the Accelerators was born. In came his brother Gabriel on drums. With no previous experience he quickly showed signs of massive potential. Bass players are a hard bunch to find. Jack Alexander Timmis is the man they have settled in on bass duties
There’s always doubts if bands can get over the ‘2nd album syndrome’. To help them overcome this they went for a man with aeons of experience behind the desk, Chris Tsangarides (Lizzy / Moore / Sabbath / Priest / Anvil etc). 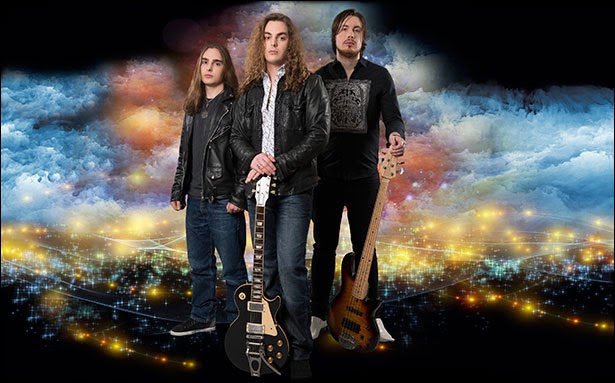 Army of Three is aptly named. Not only because of them being a rather fine cohesive unit, but also because they sound as if it’s the aural equivalent of being pounded by a battalion.

Why start off subtly when you can go for the jugular. This is exactly the premise for opening track 'Take Me Higher', an epic six minute blues rocker that just flies by. The maturity and progression from 'The Radium' has come on leaps and bounds. The paying from all three feels like its double the size, and couple this with the feel, emotion and vocalising that belie someone so young, then its bodes well for the rest of the album, and the future of VATA. Whilst the musical aspect of ‘Blow To The Head’ is killer, the same cant be said of the singing. I don’t know if it’s the chorus or production making it sounding a little weak. ‘All Night Long’ puts the VATA machine back on track – its more of a simple rocker than the usual VATA fare and when you think its all done and dusted, it comes back to life again. After the ‘meh!’ of Love Agression comes the surefire future single ‘Give It Up’ a Rolling Stones style complemented with some good harmonica playing. The latter half of the album is a strong one with the groove led ‘It Burns’, the ‘classic’ rocker sounding ‘Stand Up’, and finish on a strong un’,  the southern rock tinged ‘Free’ which will be a surefire hit when played live.

Is a great year for lovers of classic rock what with California Breed, Rival Sons, the excellent Blues Pills, and this. VATA firmly sit in good company

I cant’ wait to see them on tour in October. I strongly suggest you do the same!