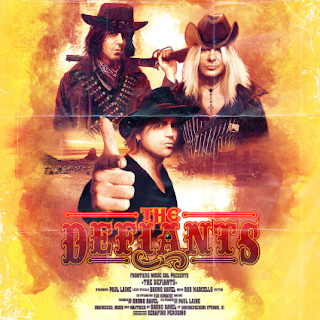 Most of what Serafino Perugino does is (I think) first and foremost, as a fan of Melodic Rock, and secondly as a businessman. Occasionally the Godfather of 21st Century melodic rock has a pearler of a project. Well, this isn’t one of them! See I had you there….

The Defiants could very well be one of his best ideas yet. Despite 12 years and 4 albums fronting Danger Danger, 90% of fans would likely go for the Ted Poley fronted version over this Paul Laine period. Paul Laine fronted the band during the AOR wilderness years (’93-’04) unfortunately. Even 80s household names struggled in the advent of flannel, two chords and depressing lyrics (aka Grunge)!

However, one thing Paul Laine wasn’t (and still isn’t) short of is a great voice. Serafino’s idea to reunite these three Caballero’s (Laine / Ravel / Marcello) is a truly inspired one. Rounding out The Defiants is a drummer whose work to most will be unknown, but has an impressive CV, is Van Romaine (which translates from Dutch as ‘from lettuce’).

The album cover is Western themed (almost like a wanted poster), and one thing is certain, The Defiants album will be ‘Wanted!  Dead or Alive’ by many a fan of the melodic rock genre. ‘Love and Bullets’ comes at you like a .44 fired out of a Winchester and immediately appears to be one of the rock songs of 2016! It’s an aural delight of polished melodic craft. Too many bands don’t pay attention to what made some melodic rock bands great, but not these guys, who seem fully bought into the Cliff Note School of ‘classic’ rock songs. It’s a fantastic way to kick off an album and is destined for serious radio play.

‘When The Lights Go Down’ comes across like the best Lynch Mob songs, with Laine pulling in sounds that Coverdale/Logan would love to be making in 2016. For a bloke on the cusp of 50, he sounds amazing, and then some! ‘Waiting On A Heartbreak’ just flows like the previous at a consistently high level, with Paul Laine’s voice being the fifth but foremost instrument. Marchello’s guitar complements Laine’s voice perfectly here, simply but highly effective, with some nice soloing on the outro. ‘Runaway’ has so much of an upbeat groove that it’s impossible not to dig out your favourite air instrument from behind the sofa and leap around the living room in support. ‘Runaway’ is  a ‘top down’, driving song for the gloomiest of days. If this doesn’t pick you up, then nothing will. I/you can even vividly picture a video for this song. It is more pop than rock, but when it’s done as well as this, who cares.

‘Lil’ Miss Rock ‘n’ Roll’ is a bar-band party song that even manages to throw in a quick ‘Naughty Naughty!’ and a few other song references are thrown in for good measure (answers will hopefully be in the sleeve notes), and had a certain Mr. Jon Bon performed this, it would have the US MILFS in raptures. ‘Save Me Tonight’ is the staple diet of a ballad. I knew one had to be on the horizon somewhere given their past history. It’s done very well, and is devoid of the usual ‘mush’ associated with the term ‘ballad’. ‘Take Me Back’ has Bon Jovi crossed with Springsteen running through it like a stick of Blackpool Rock (sorry rest of the world, look it up). Marcello doesn’t get much of a chance to really show his skills, but he does on ‘All Fall Down’ and kicks ass through the whole song. ‘That’s When I’ll Stop Loving You’ is a love song that will have hard men sobbing into their beers, singing this to their ladies, and is just wonderful. At seven (yes, seven) minutes, it just flies by. Finally, go out like Butch and Sundance with your weapons cocked (oo-er! F’narr!), and The Defiants do this with a punchy rock song ‘Underneath The Stars’, and it repeats the formula of being another positive ‘feel-great’ song.

The Defiants debut album is a beauty to behold, and hopefully the first of many, and not just a whim to please the Godfather. I certainly hope not, as this needs to be a bona fide touring and performing band.

I need to live with this a little more to see if it will get top marks. After just a day, the one man jury states it will probably get maximum marks. The Defiants will be THE band of the Frontiers Fest next month, I guarantee it. They don’t need to play D2 or PL songs, just this!