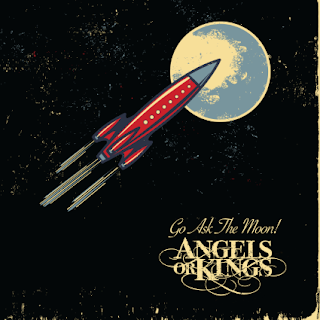 Angels Or Kings and myself go back quite a while. I used to be a regular frequenter at our local rock venue ‘The Tiv' (Tivoli) in Buckley, North Wales. Many great bands played here – FM, Drive She Said, Kings X, Badlands, Dream Theater, Romeos Daughter, Thunder and many, many others. Despite going to over 30 gigs at this place, few support bands stood out. Two of them did, and one was a cracking melodic rock band called AOK from Manchester. They were fantastic! The internet hadn’t caught on back then, so if you wanted music of any kind (vinyl, cassette, or fledgling CD), you (me) had to travel to Chester, Manchester or London to fill your collections. I so wanted an AOK album (or cassette!). How they never got a deal back in the day was beyond me, it proved to be one of the misses of the late 80s / early 90s. Shame on you.

When I heard that Angels Or Kings had got back together a year or three back, I was a happy little bunny. Their debut was a feast for sore ears and was well received by fans and critics alike, and thankfully 2016 sees them release their 2nd album 'Go Ask The Moon'. A lot of bands suffer from 'second album syndrome', but not Angels Or Kings. In Tony Bell they have one of the finest songwriters of this genre, and in Steve Kenny, a mighty powerful guitarist. Couple this melody-fest with Barrie ‘Baz’ Jackson's dulcet tones and Angels Or Kings are a band to behold, making them one of the best bands in this genre we call AOR/Melodic rock.

Early into 'GATM' and the evidence is compelling. ‘No More Faith To Lose’ is already up on anything from the debut, proving that there’s a more comfortable and blossoming writing process. It has everything you could wish for – a killer riff, harmonies to die for and the best vocal performance from Mr Jackson. I think ‘Ancient Fires’ is a semi autobiographical song about gingers..... ‘she never made the most of the sunshine, he never took a chance in the rain’. Joking aside, it’s a song that few can pen these days, its a huge slab of fluffiness. ‘No Alibi’ harks back to the glory days of the likes of Foreigner. ‘The Nights Don’t Count’ is one of those rock ballads that David Coverdale would give his left bollock for in 1987, or any other year come to think of it, and it proves to be a 'sit up and take notice' track. Its as smooth as (delete as appropriate) silk/glass/velvet/a babies bum/my un-laboured hands. 'When The Heart Is Wrong’ is just another example of highly polished and sophisticated songwriting. ‘Waiting For The Thunder’ is one of those songs you could picture on BBC 2's 'No Limits' many moons ago – a British ‘Summertime Girls’ I think .

‘On The Corner Of Love And Lost’ has more slik-ness than a seagull dipped in Castrol GTX. Tony Bell has been bigging up ‘Heartbreak Railroad Company’ for months. Thankfully he is 100% on the button, it’s a ballad that just oozes quality and if the Classic Rock Awards had a ‘Rocktastic Ballad’ award, then the voting would be closed after just one listen. If it were licensed to someone like Eric Church or Jason Aldean, then both Tony and Angels Or Kings would be sat on a shitload of money, guaranteed! Its one, if not the best songs of the year.  Angels Or Kings go out with a proper bang with the title track, one of the heaviest on the album and sees Kenny trade licks with Jackson’s raspy vocals.

If Angels Or Kings, Moritz, BRS and Vega were Americans, they’d all be playing gigs as part of a 'classic rock' package with the likes of REO Speedwagon, Pat Benatar, Foreigner and Heart, playing to tens of thousand of people. In the UK it’s a different matter, but that makes them seem as if it’s a bit more of an exclusive secret, and all ours. That doesn’t mean its OK, as all these these bands deserve a better audience as they are all flying the flag for British melodic rock and putting it in its healthiest position that its been in in years.

To summarise, if you’re already a fan of Angels Or Kings then ‘Go Ask The Moon’ is one of the biggest no-brainers of this or any other year; and if you’re a fan of AOR and not dipped your toe in yet to the velvet soaked tunes of Messers Bell, Kenny and Jackson, then get your arse into gear and buy this wonderful album.

I stated a few months back that The Defiants was the melodic rock album of 2016 – Well, I was wrong!

Too many bands don’t go back through the great songs of the 80s and listen to what made them great slabs of melodic rock. Angels Or Kings have done just that (I think) and come up with an album that would fit perfectly in any fans collection from the past, present or future.

Out 28.10.16 from all good retailers and probably some shit ones as well