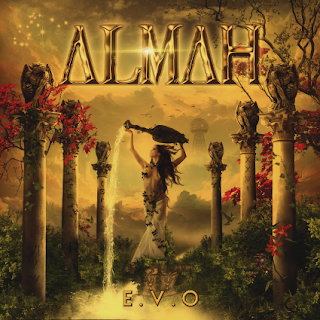 Now its not exactly unknown for me not to know established artistes / bands. One thing is for sure; I’ll always give the stream/download a listen before making a decision, as this is how gems are unearthed. I have to say that I’ve pretty much come up with the musical equivalent to a De Beers diamond mine!

ALMAH is led by former Angra singer Edu Falaschi; and I’m led to believe that he has sold more than one million albums in his 25-year spinning career.  On average 40k sales a year is no mean feat!

Since their founding in 2006, the band already has released four full-length albums world-wide (‘Almah’, ‘Fragile Equality’, ‘Motion’ and ‘Unfold’).  E.V.O is the 5th release in their career. This is a conceptual album, which is based on the evolution of the people’s mind and soul during the new age that the world is about to live in - called Age of Aquarius. The author, Edu Falaschi, visited different subjects that are connected with the main concept, creating a very positive lyric and album atmosphere. I’m coming at ALMAH completely new, blind and, after over 400gigs, probably deaf!

What can I tell you? Well it’s partly power metal, melodic, uplifting, and for the European readers, it would fit into Eurovision like a worn glove. To top it all off, it brings a smile to your listening pleasure, which isn’t always about these days. Lots of bands are enjoyable, but not all bands can make you smile.

Opener ‘Age of Aquarius’ starts off all light and refreshing, angelic voice and birds tweeting, a ballad methinks? Proggy? Well both in a way…..until about the 2 min mark, when the POWER is brought to the table. Its sounds like a musical theater opera, rocked up. And it’s the kind of song that buggers up drummers. I fear for Pedro Tinello – if he hasn’t had both knees replaced, it wont be long after power drumming of this order.  (I also bet he can’t open a jam jar to save his life!). The seven minutes of AoA just fly by! Falaschi hast got the best of voices I’ve ever come across, but what he has, he makes good use out of it.

‘Speranza’ is immediately up lifting. It comes under what I used to call singa-longa-metal. The German bands are great at this, and ALMAH takes this idea and runs with it. There (I’m gonna name check a UK melodic rock band here) are sounds of Vega to be heard (which is great for me – great band, check em out!).  If this doesn’t pick you up after a long, hard day in work, its time to start taking drugs to take the edge off. Powerful stuff.

And so it continues…..’The Brotherhood’ is the king of song I imagine being out on tour with a huge choir and orchestra, and lots of tickertape and fans blowing! ‘Innocence’ reminds me of the days when bands like Evanescence were good, and ‘Higher’ has a nice big dirty riff, and is the closest song to his past life with Angra on this album.  ‘Infatuated’ again, is a huge song,’ I’ll give it to Edu; he knows how to pen a big, dramatic and powerful song. ‘Pleased To Meet You’ is right down the middle of the road, unashamed prog rock – but not the boring prog. Its lively, with some nice keyboard touches and comes at you like a giant rock – like the one off Indiana Jones!! Here the keyboards interplay with the guitar wonderfully. ‘Final Warning’ is a little off the pace compare to everything that precedes it. ‘Indigo’ picks the pace back up and is a favourite on the album for me. ‘Corporate Way’ has a grunge Alice In Chains feel to it, with the verses seeing Falaschi sounding very Layne Staley, with the music interjecting to be metal prog. Finally, ‘Capital Punishment’. Something this lively shouldn’t purport to something as an execution. Then again I always tend go off melody and rarely the lyrics.

Praise has to be given to the other guys, as all complete ALMAH’s circle. Its not just Edu Falaschi. Barbosa and Mafra handle guitar duties extremely well, not over playing (which isn’t easy for power metal / operatic / euro / prog rock), and as stated earlier Tinello’s drumming is pretty damn powerful.

There’s a saying that goes ‘its no good being the richest man in the cemetery’. In Edu’s, case, he may not be the richest as far as money goes, but if E.V.O. is anything to go by, the enjoyment he gives to his listeners and fans is reward enough. On this evidence I will certainly be looking to dig out the back catalogue. Cracking stuff, it’s what makes reviewing worthwhile.