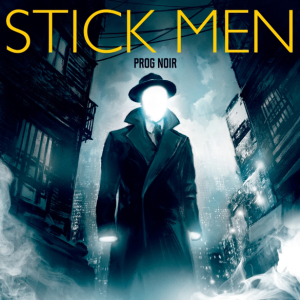 Stick men – Prog Noir
Feel free to shout at these words but I didn’t know who Stick Men were, never heard of them, passed me by, utterly clueless. Turns out they’re very clever musicians playing esoteric instruments and producing a sound that is all over the place. Two parts King Crimson in Tony Levin and Pat Mastelotto plus one-part musical octopus Markus Reuter.

So, Prog Noir. As I have not heard Stick Men’s previous releases I’m coming at this without any preconceptions and two songs in I was worried I was in for a tough listen. It’s like a painter deciding he was going to do pictures using only shades of brown, it doesn’t matter how good he is the result is going to be muted at best. So it is with the first two tracks they are lifeless in some undefinable way, they are exercises in restraint, both the music and the vocals low key and plodding but in a quirky style that makes you realise there is something good waiting to be let loose. Don’t shoot me yet wait until the end.

Then the third track (Plutonium) plays and the album transforms into something else, instantly likeable whilst taking the word quirky to a new level, (I won’t use it again I promise) any song that shoehorns a bit of ‘Yes’ in gets my vote. After this the album is off and running with a traditional song; you know the ones where there is a verse and chorus and obvious structure (sort of) but after that is all instrumentals that bring reminders of ‘Porcupine tree’ (Schattenhaft) or just calm genius until the last song which brings back the vocals, the singer kept reminding me of Hasse Fröberg of ‘The Flower Kings’ not exactly just a bit.

The production is great with everything laid out in its own space which is quite important when you’re dealing with talent like this, you don’t want to lose some virtuoso Bass playing in a muddy mix do you? Musically speaking from a listener enjoyment point of view this is quality stuff that will not set your ears on fire, you can appreciate it and grow to like some of it very much but I wouldn’t put it on at a party. It rolls along usually at the same pace and you either need to be lying on the carpet with your headphones on or driving a long way on the motorway to appreciate it, most of the tracks are experiences rather than songs.

Those first two songs grew on me after I’d heard the rest of the album and I question the running order putting the songs with vocals in one place and the instrumentals in another, mixing them up would have balanced the album out in my mind but I’m not going to tell these guys what to do, they have enough experience to make their own minds up.

In summary the album is calm, qui… I mean interesting and well-made but I won’t be returning to it much.