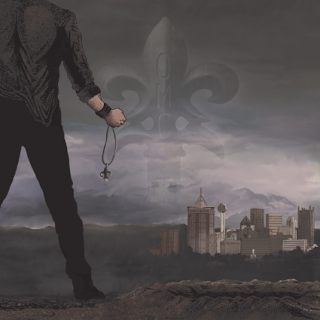 It’s only been twelve months since Geoff Tate’s last album and, although he originally stated he wanted to release something every six months, an album a year is not a bad return in this modern musical age. Tate was one of my favourite vocalists for many years until Queensryche’s Q2K which, for me at least, was a turning point, not only from a quality control aspect in regards to the song writing, but also for Geoff’s voice as he started to sing within himself and adopt melodies that were more akin to speaking and rapping than using his excellent set of pipes. So, it was with a little trepidation that I gave his new album a spin.

Resurrection is the second part of Tate’s new trilogy and follows on from 2015’s ‘The Key’, an album that had more troughs than peaks, but that itself was a step up from the trough maker’s storage locker of troughs that was ‘Frequency Unknown’. The title track opened up the proceedings and, although just a glorified interlude, I thought it to be quite an inventive start that ran seamlessly into the very likeable two minute instrumental, ‘When All Falls Away’. When the thirty second, ‘A Moment in Time’ ended, I sat intrigued at the direction Resurrection had taken. The atmosphere was excellent, the direction was left of field and it was genuinely interesting. A minute later and the haunting, ‘Through The Noize’, completed the first 4 songs with only approximately five minutes on the clock. At that point it seemed Geoff and his team had really taken the ‘concept’ by the scruff of the neck and had done away with the bland, uninteresting rock songs that had dogged the previous couple of releases. I was poised, ready to go with him…that was until the first ‘traditional’ song’, ‘Left for Dead’, kicked in.

A slow plodding track, ‘Left for Dead’ proved it is business as usual as a dull chord driven riff dribbled out of the speakers. Tate continued his usual speaking/rapping style, occasionally having his voice sometimes too low in the mix (unforgiveable, surely). ‘Miles Away’ continued the pedestrian momentum and, to its credit, contained some notable synth progressions, but the vocal melody again was choppy and utterly devoid of hooks. ‘Healing my Wounds’ and ‘The Fight’ follow the same formula which was a shame as it all started so well. ‘Taking on the world’ was a rare venture into mid-tempo range and an album highlight just because it injected a bit of life into the proceedings.
The second half of the album was a little more progressive, song wise, with ‘A Smear Campaign’ and the Promised Land-esque, ‘Which Side Your On’ being immediate stand outs. I think if Operation: Mindcrime had followed this more progressive, riff driven direction then Resurrection would have been a lot more interesting instead of the latter day Queensryche vs David Bowie mash up which we ended up with.

It’s obvious a lot of production work has gone into Resurrection and you can tell, from a sound point of view, it’s a natural successor to ‘The Key’. Although grating in the mid-frequencies at times, the album is littered with lots of pops, squeaks, electronica and effects that work really well and are imaginatively placed helping it create its own identity. But these are hundreds and thousands atop a dry and bland nut loaf. They do add to the overall experience and, with a hat full of decent tunes, this production could have worked even better.

It’s not a good sign when the worst thing about Tate’s solo project is Tate himself. His voice seems strained and his melodies are monotonous and unmemorable, all of which leads you to deduce that he’s lost his voice. I have thought this for a while until I heard Avantasia’s ‘Seduction of Decay’ with Tate vocal duelling with Tobias Sammet. Tate sounds terrific. I am convinced that all Tate needs is a new song writing team, a good producer who will push him vocally, play to his strengths and create some decent melodies. It’s such a shame he seems happy to drone over uninspired and sometimes tedious, yet occasionally interesting rock music because he’s still capable of so much more.
Resurrection isn’t terrible and is a step up from ‘The Key’ as there are some promising progressive moments. What’s the story and concept about? I have no idea as you can’t really pick out what Tate is singing, but having said that, I have no idea about Coheed and Cambria’s arcing story, I just love the tunes, which is where Resurrection falls down. I think it will certainly keep the Tate fans happy but I doubt it will attract anyone new.