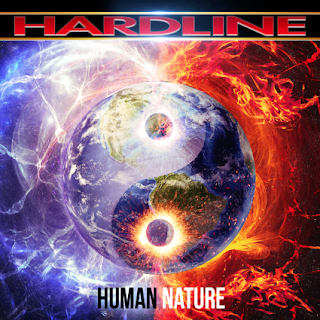 Hardline are one of those bands that passed me by initially. You see, I was a massive fan of melodic rock / hair metal / AOR, and then the check flannel shirt brigade came in and fucked it all up for me. Pretty much for about 5 years. I didn’t stay true to the bands / music that I loved, I just wallowed in my pit of  despair, just listening to everything pretty much from the previous 25 years. Unless a band that managed to survive (Queensryche / Dio / etc) only then did I keep up with their output. There was a whole host of bands like Unruly Child, Signal and Hardline that hit the street without me realizing. I eventually returned came to the party in the late 90s. Hardline’s debut, even though it was 92, is about 9 years younger than it actually is to me! What an album that was, and still is.

Onto Hardline, and Johnny Gioeli is the only original member still driving the hardline bust forward into the future. ‘Human Nature’ sees Josh Ramos to return to the fold and its definitely made a difference. The Italian connection still holds true from 21012s Danger Zone, with Anna Portalupi (Bass), Francesco Jovino (drums) and Alessandro Del Vecchio (keyboards, BVs, Producer, and all round good guy to boot)

Immediately the album begins as if someone has flicked a Nitrous switch or Boost button, as Human Nature definitely has a harder edge than recent albums. Its more powerful, but still retains its melody, proving you can have both without compromise.  This is clearly seen and heard on ‘Where Will We Go From Here’; ‘Running On Empty’; the storming ‘The World Is Falling Down’; and is to be a sure-fire hit live, ‘In The Dead Of Night’ which is one of Hardline’s heaviest songs ever thanks to Ramos’ ear for a killer riff; and the anthemic ‘Fighting The Battle’.

Interspersed throughout all of this is a fine ballad, ‘Take You Home’, some typical Hardline melodic rock in the title track ‘Human Nature’, and a superb bluesy/ soulful song called ‘Trapped In Muddy Water’.

One thing is for sure, and its that Hardline, with the Italian contingent are finding their feet, and could be a force to reckon with in the future. ‘Human Nature’ will never beat the debut, but it’s easily their second best album, and a contender for a Top 10 spot come the end of the year. I have to say that I wasn’t expecting this quality from Hardline. Its not just a filler for Frontiers, its one of Frontiers finest in 2016. Highly recommended.