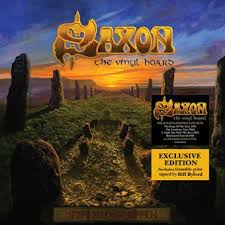 Blimey! where do you begin with four double albums of live Saxon to go at? You play them in chronological order and then shake your head at the breadth of a career spanning decades.
Let’s face it not everyone can be Iron Maiden but if anyone could have been Saxon surely fits that bill. A lifetime of metal, still going strong long after most of their contemporaries have hung up their spandex, Saxon proudly play their music and drive the audience onward with stirring choruses to sing along to whilst banging your head. Excellent. 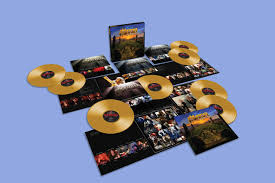 This release consists of a nice box with four double albums inside, the records are pressed in 180g gold vinyl (yes gold) and you get that nice gatefold feeling with lots of archive pictures from tours past printed on them.
These are all live albums from different tours; ‘The dogs of war tour’ 1995 which has a great warm sound to it. ‘The lionheart tour’ 2004 which does not, it isn’t bad but it has been a little over produced; maybe to fix some sound issue, and this has left it with a rather flat sound, not terrible but lacking slightly in the ‘live’ feeling.
Next up is ‘A night out with the boys tour’ 2005 which is back to having a great big sound, so if you don’t like the version of Crusader on the 2004 recording you can listen to a much better one on the 2005 recording as several songs repeat over the albums. Lastly we have ‘Rocksound festival’ 2006, Crusader is on here and the 1995 tour too, take your pick.
Now let’s face it if you’re interested in this you’re a diehard completest fan and are probably going to get a copy whatever I say. These recordings are already available in different formats and have been for years so this is aimed squarely at the person who just wants the vinyl to feel, smell, look at on a strange angle near the window checking for imperfections and lovingly place on his deck like a sacrificial offering and doesn’t mind the cost, which is a lot.
Saxon are a British treasure and listening to these recording gives you a feeling of pride that they come from our shores. If you’re into your vinyl and have the cash, you won’t be disappointed.
1.  “The Dogs Of War Tour, 1995”
Recorded on tour in Germany
Featuring: Dogs Of War, Denim And Leather, Wheels Of Steel

2. “The Lionheart Tour, 2004”
Recorded on tour in France, England and Germany
Featuring: Lionheart, Court Of The Crimson King, Are We Travellers In Time

3. “A Night Out With The Boys, 2005: The 25th Anniversary of the NWOBHM”
Recorded on tour in Germany and Sweden
Featuring: And The Bands Played On, Suzie Hold On, Stand Up And Be Counted

4. “Rocksound Festival, 2006”
Recorded in Switzerland
Featuring: Backs To The Wall, Princess Of The Night, Crusader
Posted by aorwxm at 19:17