Moritz - 'About Time Too' 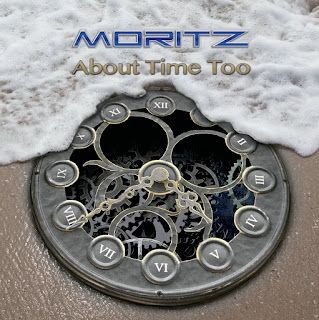 Moritz – ‘About Time Too’

Well I thought if I was going to do a last review, it might as well be a good one! Moritz are back in the game, it’s been four years since SOS was released and a mighty 30 years since their first. In terms of Prog bands, Moritz are still pretty damn prolific by comparison!

There been some changes since the last album. Greg Hart has departed to form his ‘Kittens In Orbit’ band, or ‘Moggies on Mars’, or whatever it is. Hart was one of the main songwriters in Moritz, and you would think that his trip into space would affect the Moritz output. Well, you’re completely wrong, because ‘About Time Too’ sees Moritz ditch some of the pomp and go more rock than roll and added a bit of soul and blues without losing any of the melody that the AOR crowd love them for.

I was fortunate to be given the demoes to listen to a few months back, and they were a stellar set of songs before they were tweaked and polished. I can’t believe it was 10 months ago.

The band still consists of its core members Peter Scallan (Vox), Mike Nolan (guitars) and Ian Edwards (Bass/Keys). In comes long time cohort Kenny Evans (guitars) and John Tonks (drums). I add that for the ‘up and coming gigs’, Moritz will be joined by Chris Teeder (keys) and Russ Wilson (drums). Cool. Everyone’s got a mention.

The demoes didn’t need much polishing, but they have pulled out all the stops and raided both Auto Glym and Mr Sheene and its been polished to within an inch of its life (in an utterly good way). The change is fantastic.

Scallan has had his shackles unleashed and is like a different singer. No longer trying to be pushed into being a Scottish Freddie Mercury, the guy now has a  more bluesy raspiness to his tone. And the result on the opener ‘One More Beautiful Day’ is brilliant. Couple this with the sumptuous harmonies and the wonderous composition, and starts to albums don’t get much better than this. 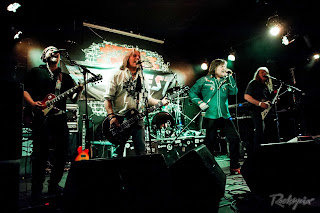 ‘Moon And Back’ is like ear candy of the highest order. The chorus just infecting your lug’oles and embedding itself after just one listen. It's like something that the lapsed Rock God Michael Bolton would have done in his brief dalliance with AOR. ‘Chance of a Lifetime’ has a great 80s lyric, ‘walking on a thin line, between love and hate’. It’s a huge 80s influenced song. In fact, if it were 1986 we would all be shitting ourselves with excitement! I’m an old fart brought up on music like this, and I did let out a little excited trump if I’m honest, as it brings back a lot of great memories from so many great bands (and times). The melodic rock community will love this. 'Dreamland’ is probably the only song on the album that keeps it all reined in. It shows a different side to Moritz and never attempts to go for the huge riff. ‘Take it On The Chin’ kicks off with Flight Lieutenant Mike Nolan (he of the flying V display troupe) who steps up and produces a face melting riff, combined with Ian’s Hammond sound which also sees Peter Scallan catching his balls on razor wire and hitting a note that only dogs and teenagers can hear. Scallan sings, ‘Some you lose, some you win, you gotta take it on the chin.’ Well based on this selection, Moritz will undoubtedly be winners. 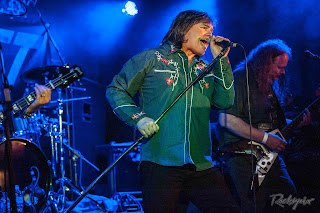 ‘Run’ shows that its not all about pure pink fluffiness. The Moritz boys like to rock out occasionally and this is a prime example. A co-write with Ivan Gunn, it gets full marks as a soft/LOUD rocker; the best ones mix the tempo, and this one does it with flair, and has a cracking guitar solo. It will sound massive live. ‘Love Long Gone’ is the kind of song that bands tried to coax out of the ‘masters’ such as Diane Warren or Desmond Child back in the day, and it wants to make you dig out your bleached denims and leg-warmers, and buy a DeLorean and head back to the 80s. ‘Own Little World’ is ‘Styx-esque’ with layers upon layers of vocal harmonies. It is a ‘Part II’ companion piece of ‘Caught Between Life & The Light’ from SOS and is an absolute delight.

Next up is my outright favourite on ‘ATT’. The demo stood out like a baboon’s arse, and it does today even though I had to go looking for it as the title has changed to ‘You Don’t Know What Love Is’. It's Like Procul Harum, Percy Sledge, and Lorraine Ellison got down and dirty, and 9 months later it spawned ‘YDKWLI’ (it just rolls off the tongue)! The guitar solo from Mike Nolan is up there with some of the best. Moritz hit the final furlong full in their stride with ‘There’s Something About/Unwanted Man’. Its got a moving synth intro (think Tarot Woman), before unleashing the beast. Fuck. Me. ‘Unwanted Man’ is huge. The opening riff is to die for, then it steps back to build its tempo to a crescendo and ‘that chorus’. Evans and Nolan trade licks like Robbo and Gorham back in the day. Wow! It's one of the best finishes to an album I’ve heard in quite some time.

Kids, there’s a bloody good reason why Moritz are so damn good. They have influences from a time when there were lots of great melodic rock bands around. They take snippets from the best and turn them into their own style. When other labels are turning out ‘average’ as being acceptable, it's great to see some local boys leading the charge and showing the rest how it should be done.

I’ve loved ‘Undivided’, and ‘SOS’, but ‘About Time Too’ takes it all to a whole different level.