Sainted Sinners - 'Back With A Vengeance' Album Review 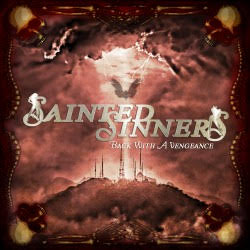 Sainted Sinners – ‘Back With A Vengeance’

Just one year after their highly praised, self-titled debut album, SAINTED SINNERS return with their second effort ‘Back With A Vengeance’. Like other bands that were born in the 70’s Sainted Sinners have wasted no time whatsoever in releasing ‘BWAV’.

Their debut really took me by surprise. It was a full-blown rock album following in the style of some of the greats. I’m here again, less than 12 months later, with some very high expectations.
Fronted by the soul-driven voice of American born vocalist David Reece (ex-ACCEPT) and guitarist Frank Pané (BONFIRE), SAINTED SINNERS are completed by the rhythm section of the two former PURPENDICULAR members Malte Frederik Burkert (bass) and the Hungarian drum maestro Berci Hirleman.

‘Opening track ‘Rise Like A Phoenix’ has a repetitive and lackluster opening, and takes over a minute to get to the riff. When it does happen, ‘RLAP’ paces along with an Iron Maiden rhythm. The only thing is, Maiden does it better. The saving grace here is David Reece’s vocals. The bloke has still clearly ‘got it’. Burning the Candle’ is in itself is straight out of the iSpy ‘Rock and Roll’ music by numbers (£12.99 from all good bookshops). ‘left out in the cold’, ‘turned over every stone’, ‘too hot to handle’, ‘down in flames’. Yup, they are all here folks.  Title track ‘Back With A Vengeance’ kicks off like a Van Halen track. In fact, I am so sure that its Van Halen that I expect Mr Roth wit the lyric… "Oh wow, man !" "Wait a second man. Whaddaya think the teacher's gonna look like this year ?" The guitar riff, and drum pattern are so close to Hot For Teacher its unreal. I am half expecting Sainted Sinners to receive a ‘cease and desist’ letter.

‘Tell me I Was Wrong’ is the first song on the album that I’ve liked for being themselves. The BVs add to the song, with its bluesy tone. It’s here that Reece shines brightly. ‘Nothin Left To Lose’ goes back to the reference book. Its got a Middle Eastern sound. Following behind the likes of Rainbow’s ‘Stargazer’, Dio’s ‘Egypt’, and Blue Murders ‘Valley Of The Kings’ it falls short in comparison to these three songs. The guys do up the ante with ‘Waitin’ ‘till the Countdown Begins’ –I’m a sucker for a Hammond Organ. Oo-er!

‘Let It Go’ follows on nicely. NOW the guys are in their classic rock groove with guitars, keys, vocals and backing vocals all coming together to great effect. ‘When The Hammer Falls’ falls on Dio territory. ‘Pretty Little Lies’ and ‘Gone But Not Forgotten’ both have a nice bluesy Whitesnake vibe. Both are songs that sit firmly alongside anything on the debut.

Clearly, Frank pane is a talented guitarist. He tries to be Eddie Van Halen on a lot of the songs here, when all I want him to do is to be Frank Pané. With their Debut, SS weren’t trying to be anyone, here they are trying too hard to sound like other bands.

For me, the second half is a lot stronger than the first as there are too many similarities to other bands songs in that first 25 minutes. Looking at other comments around the web, I’m clearly missing something here, as there’s some really positive comments regarding ‘BWAV’ .

I’m not saying its crap, it just that the guys set the bar really high with their debut. However, there are some positives to be had. Pané’s guitar playing when he isn’t trying to be EVH is excellent, the use of the classic Hammond sound is here in abundance once again, and Reece still has a bloody great voice. I just think I’ve been expecting too much.