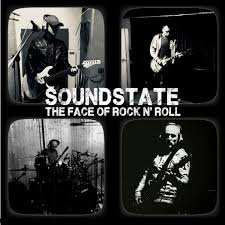 
Formed in 2004, the band gigged and recorded up until 2009 when they eventually dis-banded. Most likely to the dreaded 'musical differences!'. The band consists of - Ste Daintree (Vocals & Guitar), Carl Ashton (lead Guitar), Jez Taylor (Drums), and Sty (Bass & BVs)

After 8 years apart, they re-united in July 2017 for a ‘bit of fun’. But, six months down the line the 'bit of fun' has morphed into the recording a new mini album/EP. The band now realise that their potential is still there. Not being aware of their original output, Soundstate describe their new music as 'the most aggressive thing we've ever done'.

For a demo, and made at a low cost, the production is pretty damn good. It's hard to define them, which isn't a bad thing, as too many bands get pigeonholed into a specific genre that they don't fit in. The opening and title track  'The Face Of Rock N' Roll' is the best on offer here, Sty's pulsating bass intro sets you up for a enjoyable ride. Its the combined rhythm section of bass and drum line that really drives this song forward. The chorus reminds me of the early grunge bands like Mother Love Bone, and Temple Of The Dog. That is a good comparison in my book. 'Blackmail' follows in a very similar vein. Its a bit of slow burner for me, and improves with a couple of listens. In the end it turns out to be one of those songs that gets right under your skin - in a good way!!. Vocalist Ste Daintree has his distinctive own style, and uses his style to the advantage of Soundstate's music. 'Backstabber's' riff is similar to that of Iggy Pop's 'Passenger' and scurries along. 'My Friend' is recorded twice, firstly as an electric, and also as an acoustic re-titled as 'My Friend (Alwena's Song). For me, the acoustic version wins hands down as it has more emotion in this version and this highlights Daintree's vocals. 'Bees' is the first song to have what I would call a proper guitar solo, and this gets heavier as it progresses. All in all its good stuff, and considering it was recorded on a shoestring, its all come out really well 'in the mix' as the phrase goes.

You can get hold of the CD from the guys themselves, or via Bandcamp for the price of a pint. (£3). (Links below). Go on, you know you want to.

Soundstate are playing a benefit gig on the 31st march at the esteemed 'The Tiv' in Buckley.
Flintshire’s favourite legendary rockers B4 Time reform for this one-off fundraiser in aid of their drummer Andy Jones, who has been bravely battling a Grade 4 brain tumour for a number of years. Andy has undergone numerous operations and still shows incredible strength and resilience to carry on regardless. Following his latest operation at Christmas, he will need specialist treatment for a better quality of life, a treatment not available on the NHS. All his family and hundreds of friends are collectively aiming to raise £30,000 so Andy can obtain the help he needs - http://tivolivenue.com/events/b4-time-present-charity-rock-night-saturday-31st-march-2018/

You can also donate here - https://www.justgiving.com/crowdfunding/andy-jones-fightinggbm4 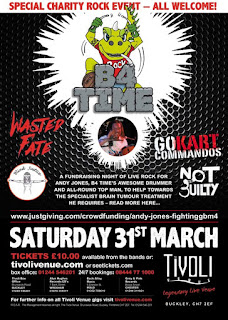