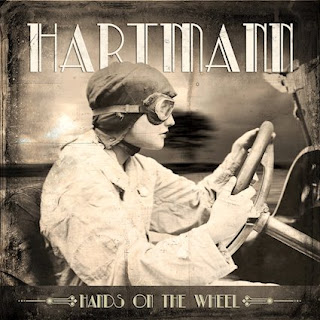 Hands On The Wheel : Hartmann

Hartmann burst on to the hard rock scene in 2005 with their well received debut album 'Out In The Cold', since then the band have worked tirelessly releasing an impressive 6 albums consisting of 1 live and 5 studio albums the last being 2016’s 'Shadows And Silhouettes'.  When not in the studio the band were busy building an impressive touring resume playing with the likes of Toto,Y&T  and House Of Lords.

Jumping forward to 2018 and Hartmann are getting ready to unleash their latest album 'Hands On The Wheel'.

In my opinion 'Hands on The Wheel' is for the most part an excellent album but I felt that there was something missing. 'Don’t Want Back Down' is an excellent  opener and sets the tone for the majority of the album, 'Your Best Excuse' and 'Cold As Stone' are solid rock anthems that will have you reaching for the volume and introducing your neighbours to the band. 'Simple Man' is an extremely well put together track and the opening actually sent shivers down my spine. 'Last Plane Out' will transport you back in time to the late 80’s early 90’s when poodle perms and leather trousers were all the rage.

The next track however is where things seem to go south, 'Soulmates' is a song that when played live will have lighters in the air but I found it extremely dull and sleep inducing however hearing the opening of 'The Harder They Come' soon pulled me out of the stupor, it’s the type of track that makes you sit up and start pumping your fist in time, 'Dream World' carries on in the same vein and will have you screaming 'Dream World' at the top of your lungs. 'I Remember' and 'Lost In Translation' were decent enough tracks however they just don’t belong on this album, listening to them actually made me think of Queensryche’s Empire. 'The Sky Is Falling' is a typical power ballad with a steady build up before the soaring vocals and would have been an excellent closer to this album but sadly that was left to 'Heart Of Gold', just like 'Soulmates', 'Heart Of Gold' is a lighter waving ballad but just like 'Soulmates' I found it extremely boring.

'Hands On The Wheel' gets a solid 7/10 it’s a good album just not as good as their earlier material.