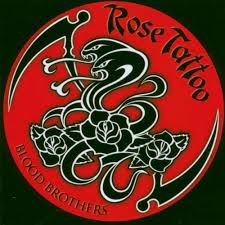 Rose Tattoo will be kicking off their Blood Brothers 2018 tour at the end of March with the 2018 bonus re-issue edition of their classic 2007 album set for release on 18th May through Golden Robot Records.
The re-issue features killer live versions of some of the albums finest tracks, including Man About Town, Black Eyed Bruiser, Once in A Lifetime, Sweat Meat, Standover Man and Nothing to Lose recorded live in all their glory and captured on disc. This is the Tats at their best. Raw, rough and ready for a fight, but also tight as a fist and sounding bigger than ever.
Opening track ‘Black Eyed Bruiser’ is a very welcomed mixture of The Kinks ‘You really got me’ with vocals reminiscent of AC/DC’s Brian Johnson. Having never heard Rose Tattoo before, that’s the first thing that hit me. A great opening track. Proper Rock. And this continues into ‘Slipping Away’, an Aerosmith type rock n roll classic with some nice slides.
The album progresses into ‘Once in A Lifetime’, which has a fantastic drop chord for the chorus that keeps it chugging along just nicely. This is proper driving rock, with the window down, arm out.
I’m hearing lots of bands from my teenage days here. AC/DC, Aerosmith, Thunder, Kiss, even Little Angels to an extent. All of which make this album more enjoyable as it rolls on. ‘City Blues’ is a nice, dark, crawler of a song which slows the album down a touch, and probably at the right time too, concentrating on some more nice slide work and clever guitar riffs, which allows ‘Sweet Meat’ to unleash it’s opening chords with venom. This is a classic rock and blues number with a killer riff. ‘Man About Town’ has a Kiss ‘Cold Gin’ feel to it which works well. What’s great about Rose Tattoo is that when a lot of these songs start, your initial impression is that the song is just ‘ok’, but as each chorus kicks in, it changes everything. They become really good songs. ‘Nothing To Lose’ is probably the weakest song on the album in my opinion. Not much going on in this song to be fair, nothing that really stands out and makes me take notice, which is why I’m surprised that this was chosen as one of the bonus live tracks. The album concludes with six live tracks from the album which capture the live element of the band really well. A good addition to this re-issue.
Fans of AC/DC, Aerosmith etc will love this album. It’s a great rock and roll album, but slightly lacking in originality but enjoyable none the less.