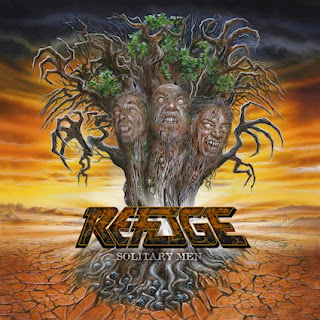 Peavy Wagner, Manni Schmidt & Christos Efthimiadis released five critically acclaimed albums as one of the most successful line-ups of the German metal band RAGE and have now reunited under the name REFUGE to carry on the sonic assault they started back in ’87. What started out as a “fun thing” in 2014 has turned into a real band again! Refuge’s debut album, ‘Solitary Men’ will see the light of day in summer 2018. It will be the first album of original material from this classic Rage line-up in 25 years and will surely satisfy fans who remember those now legendary albums!

My initial thoughts when this album starts is how far stuck in the late 80’s these guys are. There’s a really nice slow bit towards the end of ‘Summer’s Winter’ but that’s all that pulls me in so far.
‘The Man In The Ivory Tower’s’ opening riff gives me some hope but vocally, for me, something isn’t right, it doesn’t gel with the music. ‘Bleeding From Inside’ kicks in and that’s exactly how I feel listening to it. The opening riff is great but as soon as the lyrics kick in the song is destroyed. These guys are typical mid 80’s Megadeth / Iron Maiden style heavy rock and if you’re from that era it may be right up your street. I’m from that era and it isn’t, but I’ll continue to listen and give my fair opinion.

‘From The Ashes’ offers hope with it’s Dave Mustaine inspired opening which is great, but again doesn’t live up to expectations. ‘Living On The Edge Of Time’ is the best offering so far, with it’s ‘South of Heaven’ style intro. It is a very Helloween-style song.

As the album progresses its fair to say that fans of RAGE will love this. ‘We Owe A Life To A Death’ confirms what I’ve been thinking. I’m hearing, Maiden, Sacred Reich, Holy Terror. Nothing wrong with that, however, most 80’s bands have been able to drag themselves and their music into our current era. These guys haven’t and it’s a shame.

‘Let Me Go’ gives us a more rock’n’roll feel to the album but lyrically it just doesn’t work.
Overall this album will be a great addition for RAGE fans, but I can’t see it attracting any new fans. There just isn’t any song that stands out and shouts to a new audience. If you love RAGE buy it, if you’ve never heard RAGE………………Don’t.