Flotsam and Jetsam - 'The End Of Chaos' Album Review 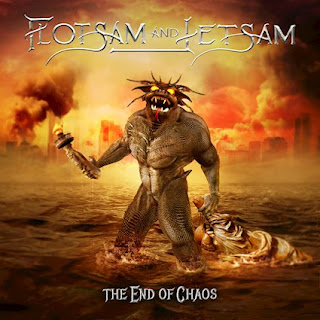 “Hell no!” Flotsam And Jetsam’s master behind the microphone Eric “A.K.” Knutson exclaimed when asked if this was the band’s final swing of the axe! The End Of Chaos certainly could be construed that way title-wise. But what do you do when you unleash arguably the finest hour in your 30-plus year career (2016’s genius Flotsam And Jetsam)? You head back to the dark n’ dusty garage to keep that momentum going. Let’s get one thing straight. Flotsam And Jetsam are a true anomaly in the annals of heavy metal history. The most under-rated entity in heavy metal history. Period. True fighters, the Phoenix-based five-piece led by originals A.K. and guitarist Michael Gilbert (along with long time bassist Michael Spencer, guitarist Steve Conley and drummer Ken Mary) have been doing battle in the trenches since the early ‘80s. And although people point to their first album (1986’s Doomsday For The Deceiver) as a game-changer, the band didn’t need the first (and only) 6K rating in Kerrang!’s history to gain accolades. There was much more to come, a helluva lot more. And without the ghost of Jason Newsted hovering - he jumped onto the Metallica freight-train just after the debut was released - Flotsam And Jetsam were off and running.

I remember buying ‘Doomsday For The Deceiver’ picture disc, solely because I was a huge Metallica fan at the time and because Newsted played bass on it. Unbelievably I never listened to it. But I did listen to their 2nd album ‘No Place For Disgrace’, and it was an absolute belter and still is. ‘Hard On You’ was just awesome.

There’s no stopping as ‘Prepare For Chaos’ makes me do just that. Superb album so far with great production. It’s a very heavy album is this, but still keeps the Flotsam roots which is testament to these guys after a 30 year career. The backing vocals in the chorus of ‘Slowly Insane’ are strangely parallel with Layne Stayley’s Alice In Chains. I can honestly say not one song disappoints on this album. It’s a must have for all Flotsam fans and metal fans alike. The riffs are just superb and speeds are just constant throughout. Album closer ‘The End’ gallops towards the finish line with superb pace. Here’s Looking forward to seeing these guys at Hammerfest in March.
Score 8/10