Internal Conflict - 'Nothing Is Lost' Review 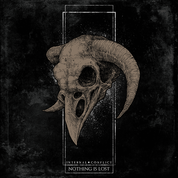 Internal Conflict - 'Nothing Is Lost' EP

Internal Conflict are known for their aggressive and energetic sound and live shows. They released their first EP way back in 2007. A full length album was released in 2015 (The Rising Tide). Internal Conflict won Metal 2 The Masses in 2013 which took them to the Bloodstock New Blood stage.

Fans of Slayer and the like will love what I’m hearing here. Opener ‘Catharsis’ which follows the intro ‘Nothing Is Lost’, is brutal and shows this bands strength and diversity. It’s powerful, angry and holds some great speed changes.

‘For The Crows’ is more of the same with some nice stop-start moments added in for good measure. Production-wise this is superb.

Ep closer ‘Nothing Is Past’ is a beautiful piano instrumental with hints of guitar and keyboards in the background. Although nothing like what I’ve heard so far on this EP, and I must say it’s a bold move to include something like this on such a short offering, but it’s brilliantly calm and relaxing. A bold move that’s come up trumps.

A highly recommended EP for the heavier listener.