Killit - 'Waiting For The Day' Single 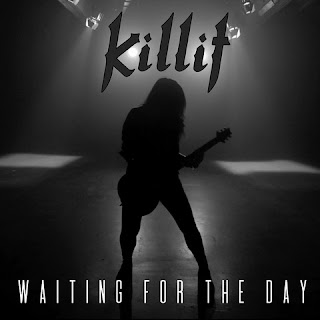 I love it when a new band appears on my radar, especially when said band is right up my cul-de-sac! Killit are a bit of a United Nations of a rock band and will probably be fucked for touring once Brexit kicks in as they originally hail from Hungary, Israel, Switzerland and good 'ol Blighty (soon to be renamed Northern Ireland's Bitch). Founded in 2016, their first single was quickly released and garnered a hefty 100k views. Recent shows at Ramblin' Man, Giants Of Rock, Isle Of Wight, Stone Free and Hard Rock Hell soon followed and they have also toured with Diamond Head and Reckless Love.

This new single 'Waiting For The Day' precedes their album due out in 2019. I have to say, its fucking awesome! If you want face-melting riffs, with crackin' vocals and a bit of classic rock with melody in spades, then look no further than this song, and Killit!

Its not a short song, weighing in at a hefty six minutes, but the time just rushes by and its over all too quickly. I'm particularly drawn in by the strength of Gaz Twists vocals, and everything else in all honesty! The video is bloody impressive and looks like they have the backing of a major label when they probably don't.

I'm guessing they have a love of some 80s-2000s metals bands as there's everything from Clutch to Dokken, to Mustasch and loads in-between.

When bands like Massive Wagons, Doomsday Outlaw, are getting great reviews (and rightly so), then Killit must be spoken in the same breath, as I sincerely hope they deserve to be going places, and I think that place is 'UP!'