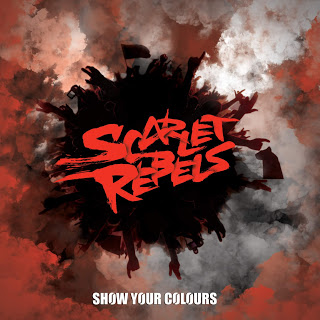 Every now and then a band comes along that makes you go a little bit moist. Am I right fellas? Well this happened in 2015 with a band called V0id. Their third album ‘Keep Fighting’ was a little belter, and I bigged them up to anyone who would listen. They were good. Very good in fact. Even better live. The provided PR suggested great things and some highly regarded peers spoke very well of V0id. Who was I to question the comments? I listened, and came to the same conclusion that V0id were on a path to greatness.

Thankfully a name change came about last year. An internet search for Void (without the ‘0’’) meant you’d find them about 27 pages in! Scarlet Rebels name is a vast improvement. After an album hiatus of 4 years, the next , or should I say ‘first’ chapter of Scarlet Rebels is about to be written, and it’s going to become a best seller. 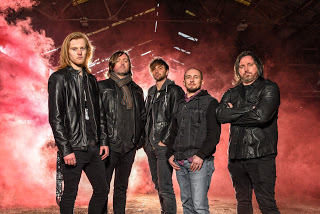 The band still has a nucleus of brothers Wayne (Vocals, Guitar) and Gary Doyle Drums), along with bassist Wayne Esmonde, but have added some steel with lead guitarist Chris Jones, and Josh Townsend (guitar, keys); and after witnessing them at HRH, with a couple of teasers from ‘SYC’, a huge leap forward that I didn’t think was possible has been achieved. That was before I even heard the album. To that end, I have eagerly been awaiting for ‘Show Your Colours’ to drop.

So, if you’re a fan already then the lads have produced their finest piece of work to date. If you’re thinking of getting into a new band…..then lets see if I can convince you to part with your hard earned. Opener ‘No One Else To Blame’ isn’t exactly a sprint, more of a well-timed finish. A slow burn for me initially but after a few listens, the guitar work, and chorus just power it along like a juggernaut. ‘You Take My Breath Away’  is all about the chorus. They are giving ‘every song a killer’ Vega a definite run for their money. ‘Head’s In The Ground’ sees Scarlet Rebels aligned with my opinion on a certain orange coloured fella across the water (and Brexit!), and is a bit Shinedown in its preaching, and that’s no bad thing. 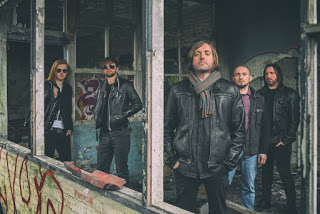 ‘Part Of Me’ has a country-rock-slide-guitar and acoustic opening. It’s a bit of a change of pace, but the chorus is just HUGE. ‘Heal’ is a song they aired when I caught them at HRH AOR and was one of the stand out tracks. It’s low key first half, before a riff kicks in, then its down to the emotive and passioned chorus. Wayne Doyle certainly has a knack in getting you involved with his lyrics. A song of two halves, its my fave of the album so far. ‘Let Your Love Go’ reminds me a bit of a song by Tito and Tarantula. Its got high energy and a wallop to boot. ‘Nothing To Say’ is another song about sticking it to the man. Doyle clearly has a lot to say in his lyrics.  ‘Save me’ is standard fare as it guys for these guys, but its up against some high quality songs.

‘Blinded By The Pain’ is the longest song on the album. Whilst it isn’t epic in length, it is epic by any other means. It has to be a shoe in for their live set. ‘Shattered Dreams’ sees me running out of superlatives at this point. A harder edged song that evokes a bit of Alter Bridge. ‘Can I Open My Eyes’ is a cracking fast paced song that deserves to be a hit in any other time when rock ruled the airwaves. 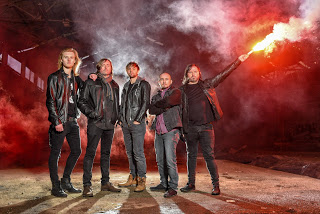 ‘Returning Light’ is the third barnstorming song on 'Show Your Colours'. I love the melodic hard rock numbers, but the real gems for me are when you can hear Wayne Doyle open up his heart and expose himself to some real emotionally delivered songs and this one is the absolute pinnacle of the album. I could imagine this with a choir or an orchestra and it would just bring people to tears. Its stunning, absolutely stunning.  ‘Losing End’ is a song that could easily be from the Foo Fighters, and goes toe to toe with the Grohl. Last and by no means least is a Scarlet Rebels 'balls out rock song' in the vein of bands like ‘DC, Krokus and Accept where it is all about the riff and the chorus.

Its the kind of album that you could be blindfolded with a pin in hand, and the song you pick could easily be a single or a favourite. Scarlet Rebels have a contender here, because the songs range from ‘great’, to ‘excellent’. There are songs here for every day and every emotion.

Its almost a perfect storm, all five guys hitting peak performance, a pounding rhythm section from Gary Doyle and Esmonde, a three guitar attack from W Doyle, Jones and Townshend, and some great vocals from Wayne Doyle.

Whilst they are not newcomers, Scarlet Rebels have put lots of miles, hard work and graft into these past few years into what should be an album of breakthrough proportions. If you like songs that are
a) as catchy as a baseball glove dipped in UHU, or
b) have more hooks than a fishing tackle shop then look no further for your musical fix.

Its an enchanting, exhilarating ride from beginning to end, and considering its their first album, and having time on their side, I wonder what future gems await, as they enter their peak.

Its 53 minutes of some of the best melodic hard rock you’ll hear all year, and beyond…Scarlet Rebels are the best band you haven’t heard yet!