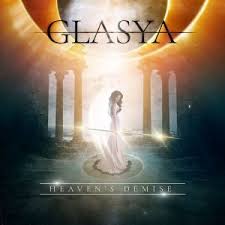 Glasya  - Heaven’s Demise
Glasya are a symphonic metal band that hail from Portugal and are the brainchild of guitarist and founding member Hugo Esteves who wanted to bring a dramatic dynamic to the symphonic metal scene. Hugo has recruited a selection of highly talented musicians and a singer with a voice to die for.
As the finished article the band Glasya  appear to be the new kids on the block in the symphonic metal scene however they are the exact opposite as the majority of members of this ensemble cast are already stalwarts of this genre.

Heaven’s Demise has been on constant repeat for the last couple of days and I really enjoyed the album , the lyrical content and composition are fantastic and the production is sublime. The problem with symphonic metal and it’s something that affects the genre as a whole is that once you dissect the songs a pattern emerges, the long intro which ends with either a fist thumping rock/metal  sound, a short monologue or Eduarda’s soaring vocals, whilst the three styles sound fantastic and thanks to superb composition the transition between styles is flawless it’s a sound that I’ve heard many times before, Glasya do leave some of the established bands in their wake which is a great achievement especially when some of those bands have been part of this genre for close to two decades.

Hugo stated that he wanted to bring a new dramatic dynamic to the sound sadly it’s not new and bands such as Within Temptation and Leaves Eyes have been successfully utilising this sound for quite some time. I was hoping to hear a sound that would really make me prick up my ears but sadly this wasn’t the case. That being said I’m not the type of person who will mark an album down just because there a similarities to other bands of this genre.
Even though Glasya are a band who’s members  have been part of this genre for quite some time 'Heaven’s Demise' is still their debut album and it is a cracker.  I do like this album, however it’s not a CD that I would make a midnight trip to HMV to pick up.
Will I put my money where my mouth is and buy this CD? The answer is yes but it will be a while before I do so. I’m giving 'Heaven’s Demise' a solid 8/10 score, it would have been a 9, however  the dramatic dynamic I was hoping to hear was nothing I hadn’t heard before.
Score 8/10
Review by Hollywood Vampyre