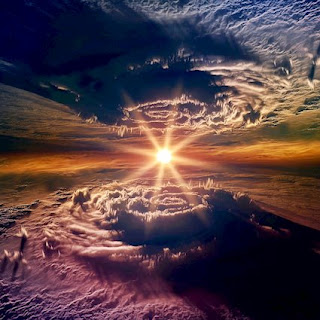 Like my review of Leprous yesterday, Klone are another band I’ve never encountered. And, just like Leprous, I want them in my life from here on in. I find this album wonderful on its first listen, and wanted to hear it a bit more before reviewing. OK its past the release date, but I make exceptions for albums that deserve a write up and more importantly, a listen or purchase.

“Our music allows the listener to travel and ask, ‘What is the spirit? What is the matter?’ and those kinds of questions,”/says guitarist Guillaume Bernard. “/The title refers to the wandering of the mind. It all came our singer [Yann Ligner] who came up with something in English like ‘The Great Journey’. We all liked the meaning but weren’t sure how it sounded. Eventually we realised it would be easy enough for people to translate and understand in our native tongue.”/

Much of the inspiration on forthcoming singles “Breach”, “Keystone” and “Hidden Passenger” came from pondering the great philosophies of life, those eternal unanswered questions like who we are, where we are going and, ultimately, what happens next. It was the uncertainty and confusion surrounding mortality, the notion that something or nothing awaits us, which felt like an unlimited creative playground for the French art-rockers.

“Me and Yann were watching documentaries about near death experiences,” continues the Klone guitarist. “We’re no specialists on the subject, but we found it exciting to think about. Our music is really connected to universe. We used a lot of reverb, almost as if we were to touch everything in space… we wanted our music to resonate in the cosmos!”

Their stance is a very similar one to my last review which was for Leprous, “We don’t have to respect any particular rules when making this music.” I really like that, because why try to keep making the same album when you can push yourself to make something different and make no apologies for doing so.

“Yonder” is a song epic in length and also in stature. I was anticipating some pronunciation issue, but was availed of this just by hearing the first line, as Yann Ligner’s pronunciation is much better than mine. Similar to Leprous, I just fell for the vocals immediately. ‘Yonder’ is a song that is as wide an expansive as the sky, the texture of which would be even better played live. I found this song mesmerising. I find Yann’s style similar to Layne Staley only with more range. ‘Breach’ is a high and airy song, and has  the DNA of Pink Floyd and Porcupine Tree running though its body. Its as close at a single as a band like this ever gets. ‘Sealed’ sees Ligner sounding like prime era Gordon Sumner, and some delicate vocals and snappy chorus. ‘Indelible’ moody and emotive opening develops to electronica and even jazz-sax in the latter, accompanied by some fine rhythmic drumming from Berthet leading the way. Jazz-art-rock. Its the future.

‘Keystone’ is both ethereal and haunting, and the last quarter just opens up sonically and is a highlight of the album so far. This in particular is a passage they could expand on live and make for one hell of an experience. ‘Hidden Passenger’ makes me quote Nigel Tufnel. As the mood takes a downturn, ‘D Minor, the saddest of all keys, I find”. Klone don the flannel and plaid shirts for a very 90s grunge sounding ‘The Great Oblivion’ with more AIC inspired guitar work. ‘Sad And Slow’ is Klone Ronseal moment. Its not bad, its just that the bar has been sry high for everything pretending this track. Finally we are on to ‘Silver Gate’ . It take a short while to get going, and the first minute or so makes me think of The Doors, but when it does ‘go’, you are rewarded with a very enjoyable listen, an envelope of ‘Klone-sound’ (Pat.Pending) encircling and comforting you

I am very impressed with the quality on ‘Le Grand Voyage’. Ligner's voice is very good. He has a very unmistakeable tone, and that does make some of the vocals a bit ‘samey’.  Its not a negative, I'm just stating what I feel. That said, it hasn’t stopped me from loving and buying the album.

I have to say Ive been pleasantly surprised by the quality of this album, and I apologise for not taking any notice the past 20 years. All I can say to that is, I will rectify this omission. I really liked this album. A lot!