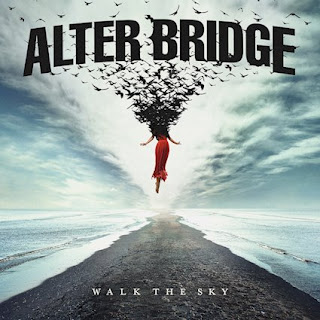 Few bands formed in the 21st Century would be added to my all-time list of favourite bands. Alter Bridge are one band that sit proudly for me amongst the likes of Rainbow, Thin Lizzy, Rush, and Van Halen. Ive been hooked right from the off, when I heard one of the songs on a rock radio station on holiday in Orlando promoting the debut album, ‘One Day Remains’. I have watched them break the chains of any connection to Creed, and in doing so becoming one of the best live bands I’ve seen in many a year.

For me, their true reckoning came with the release of ‘Blackbird’. Later albums, have more than had their moments, but this (Blackbird) was good, great even. For me, it is still the yard stick to be measured by. ‘Walk The Sky’ is their sixth studio release, but can it surpass ‘Blackbird’….?

Well what we have (for the first time in their 15 year career) is a bit of a game changer for Alter Bridge. Ok, the foundations of an Alter Bridge record are still there, industrial scale riffing from Tremonti, pulsating bone pounding bass and spleen splitting drumming, and the eloquent and uplifting, positive vocals from Kennedy; but when I say game changer, gone are the lengthy numbers, and most here are short and snappy, even with a bit of electronica to boot! (Godspeed, a song that feels and sounds as if it could be courtesy of ‘insert 80s band name here’. Its probably the ‘poppiest’ they have ever produced. It has the DNA of what I call ABs ‘funeral song’. How could it not be with a line like “Farewell, Godspeed, goodbye, you have changed all our lives.” Kennedy certainly knows how to pen an emotional and gut-wrenching lyric.

‘Wouldn’t You Rather’ opens in typical Alter Bridge manner - a bludgeoning Tremonti riff, encircled with Kennedy’s harmonic wail; its like adding a fourth tried and tested instrument, adding ‘Wouldn’t you rather live from the heart?’ A  lyric to fuel many a tattoo parlour over the coming few months I suspect! ‘In The Deep’ is full of melody and almost certain to be a video release. ’Native Son’ starts with an eastern sounding tones, before the hammer blast falls like a blacksmiths anvil. ’Take The Crown’ is of a slightly lighter fare,  but lyrically it’s still thought provoking, as are the lyrics to ‘Indoctrination’.

‘Pay No Mind’ is another with a keyboard /sequencer undertone. AB, using keyboards as a prominent instrument? I’m in! As it adds depth and power to the overall sound. ‘Forever Falling’ lulls you into a false sense of security, like being waterboarded only with guitars! It sees Tremonti take a lead with the vocals. It further shows his development as a vocalist in his own right.

“If I die tonight, would the question still remain? Did I live for what was right, did I live this life in vain?” Is the opening and existential verse to ‘Clear Horizon’. It make me think about Kennedy’s persona. Putting yourself ‘out there’ lyrically is cathartic and cheaper than any shrink could assist with. It also shows why Myles is one of the true masters of his trade. The absolute highlights for me though are on two of the last three songs - ‘Walking On The Sky’, wailing “Do you feel alive, tempting your fate on the line….”, and is as monstrous as the sky is infinite. ’Save the best till last’ is a saying used far too frequently, but is not the case here. ‘Dying Light’ is a ‘Blackbird-esque’ song in its emotion-evoking spirit, rising and falling like the waves, its guitar building to the impending Tremonti solo. The result is a big, huge monolith of a song, with the closing lyric of “In the dying light, we can begin to live again” and sums up AB for me. A new dawn is approaching for Alter Bridge, and the outlook is very promising indeed

It’s their most mature album to date, and is their best album this side of Blackbird. Other opinions are available, obviously.

For me, one thing is certain, few bands can muster or match the consistency that AB have attained these past 15 years. Along with a band like Ghost the futures of Download festival et al, are in very safe hands indeed. Cracking stuff.