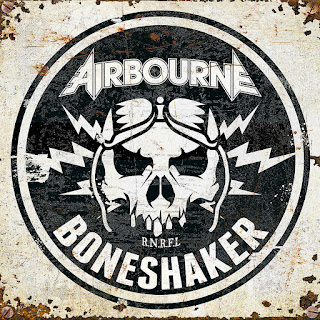 Me and Airbourne have a bit of beef. (Ok I know its not grammatically correct). Not serious beef, more like beef substitute. I’ve been to lots of gigs since I was 15 years old. I’m 52 now, so let’s just say that its ‘lots’ of gigs. But only one band got me admitted to A&E, and that’s Airbourne. Manchester Academy, near the front, 2011. It was unnoticeable at first, but when we left the venue, my son who was about 15 at the time sounded like a Smurf. We laughed all the way home. After an uncomfortable sleep, it was no longer funny, I thought I was fucked. I could hardly hear a thing and was relying on lip-reading. Four days passed before it came back, and I was shitting myself. Today it’s more of a badge of honour, because very few bands crank it like Airbourne and sadly missed Motorhead, and mainly because there is a legal limit. I’ve forgiven them. I am sure they can now rest, in knowing I no longer hold that grudge.

Enough of my problems. Let get onto the review. I loved the first two Airbourne albums, and clearly saw them as a methadone replacement for AC/DC should they ever jack it in. (At this rate, AC/DC will still be touring in 2043, only it will all nephews of the originals!). Their star rose very quickly, playing the likes of the big Academy in Manchester etc. in a short space of time. Nine years later sees them still playing the same venues, and I was seriously tipping them for much bigger audiences. At least they haven’t gone backwards!

Bands give 100%, and then there's Airbourne. Their effort feeds into their high-octane songs. Title track Boneshaker opens up and typically, it’s in their inimitable style. Let’s face it, who wants them to do an Opeth and see Airbourne go left field all of a sudden. It’s AC/DC by any other name, and the title falls right into TNT, or Thunderstruck territory. I can see others criticising the format, but ITS WHAT AIRBOURNE DO! ‘Burnout The Nitro’ follows suit in wanting to rip your head off and piss down your throat, with its ferocity. ‘This Is Our City’ slows the tempo down a bit, it that’s possible of Airbourne. It’s also quite simple and minimalistic. I just noticed that its been produced by Dave Cobb, which is didn’t expect, but so far into Boneshaker I can immediately feel his impact on the songs.

'Sex To Go' sees O’Keefe going to the David Coverdale ‘iSpy Book of Saucy Lyrics’, "Gotta get me a bit of meat on the bun; Supersize, cheese and fries, all I really want is your apple pie". ‘Backseat Boogie’ is their go to bar-room, spit and sawdust, beer-swillin’ number – fun, sweet, and neat. I immediately wanted to connect to ‘Blood In The Water’ thinking they had written a song about my kidney stones, but it’s no such thing unfortunately, as Airbourne have more than enough liquids in their diet, unlike me! Instead I’m certain it’s about ‘Jaws’. It has a growling riff, and pounding base. You don’t need a chiropractor to realign your bones, just crank and let the power of the riff do its work.

‘She Gives Me Hell’ follows the ‘You Shook Me…’ beat as being a close a dance track as Airbourne could possible do. ‘Switchblade Angel’ is a 100w, raucous number that these guys can now write in their sleep. Simple and effective. ‘Weapon Of War’ mixes it up a bit with a slow and menacing riff, which builds to a crescendo of sound – riffage, thunderous bass, powerful drumming, melodic and fist pumping energy. It’s on to the last track all too soon (I think I’ve had longer dumps! The running time is a short and sweet shy of 31 minutes), the Airbourne random name generated ‘Rock ‘N’ Roll For Life’, a song that will no doubt be coming to a tattoo parlour soon. It is out of the blocks like a stabbed rat. Fast, frenetic, and LOUD. You need to take a breather, just listening to it.

If you’re a fan already, its rinse, repeat, enjoy. It’s what they do best. Airbourne probably make no apologies for what they do, and rightly so. You can only listen to this album at full volume, anything less and you’re a Jessie. The closest you can get to a gig without being there in the flesh. Dave Cobb has done a good job with the production. It’s rawer than anything previous and he has managed to catch that live feeling that few can on an album. It has more grit than McAlpines quarries.